Casumo first launched just as mobile gaming was becoming popular. It’s hardly surprising, then, that they have put just as much effort into creating an excellent mobile casino as they have to design a desktop site. The ‘adventure casino’ concept which Casumo Casino pioneered is perfect for smaller screen mobile devices from which players can easily trace their route around the Casumo universe. The online casino site is renowned for its loyalty programme and engaging user experience, but it wouldn’t have achieved its unparalleled success without a great range of casino games too. Mobile players can benefit from one of the best catalogues around, with all slots and table games optimised for use on the smaller screen. So, without further ado, let’s explore the Casumo mobile a little further.

Casumo’s desktop site is a bright and busy affair. It’s been beautifully designed to appeal to the modern gamer. The site is spacious, uncluttered and remarkably easy to use considering this is far more than your classic casino experience. Adventure casinos can quickly fall into an obvious trap. By trying to engage players with enhanced players, they can also overly complicate their design and ruin their user experience.

Despite being the first of its kind, Casumo avoided those pitfalls. Intuitive site design is even more critical for a mobile casino, and Casumo has translated its site seamlessly for the smaller screen. You can access live chat customer support and the real money cashier from your mobile device, which allows you to both deposits and withdraws cash on the move. Speaking of which Casumo facilitates deposit and withdrawal using Visa, Mastercard, Bank, Skrill, Neteller, Paysafecard and Pay by Mobile. Buyer beware though, deposits using Skrill and Neteller generally do not qualify for bonuses at any online casinos.

Space restrictions do precipitate some changes. There isn’t quite as much of the signature blue that you find on the desktop site for example. However, the bright little rainbow which appears as a new page loads is retained, and more importantly, the mobile casino’s menu has been arranged sensibly too. The main menu never leaves you more than a click away from the games page or cashier function. You can also track your progress against Casumo’s rewards and missions via the Adventure tab, which stores you progress around the Casumo universe. The more you play, the more you win and the further you’ll progress. The ‘Adventure’ is one of Casumo’s unique selling points and effectively acts as a loyalty programme against which you can win many a casino bonus, all of which can be used from the mobile app.

The Casumo casino app works entirely based on the individual player’s actions; this allows every player to have a unique online gaming experience. This level of personalisation becomes immediately apparent from the moment you log in to the app. When you log in, you will be greeted by a personal dashboard which showcases essential things to you at that given time. The personal dashboard will display the latest games you played, any current missions and Casumo’s most popular games, as well as recommending games based on your most recent selection. One feature in particular, which is extremely useful on the Casumo Casino app is the ability to minimise games while you look at other areas of the app. By pinching the screen in which the game is displayed, you can then go on to make more deposits, look at other games and more, all while your game is still running in the background.

Talking of the mobile app, Casumo’s is available to download from both the Apple iTunes store and the Android shop at least according to the Casumo website. For Apple users, the app is compatible with iOS 9.1 or later on the iPhone, iPad and iPod touch. Additionally, the iOS version is in English, Danish, Finnish, German, Norwegian Bokmål and Swedish. Alternatively, you can play via your browser if your prefer – as is expected from modern online casinos – but the Casumo mobile app gives you one-click access from your homepage. 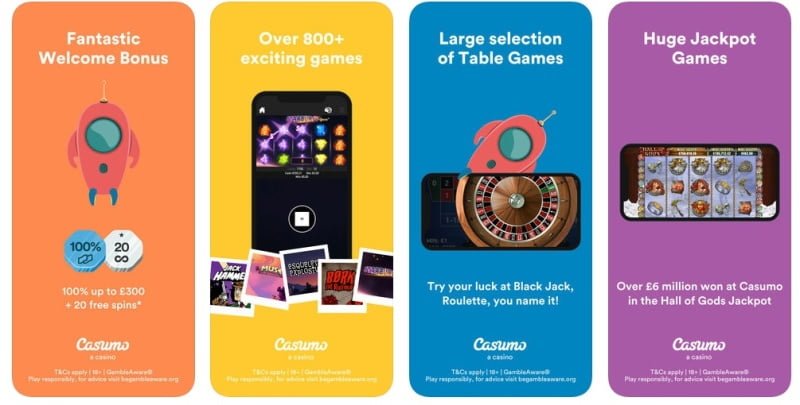 Casumo naturally attracts loyalty from its players, so the mobile app is more popular than some of its peers. Players often stick around to complete the adventure and reap the rewards that come with continued progress. The site encourages regular play rather than ‘casino hoppers’ who move from site to site in search of the next bonus. There is always a bonus available at Casumo, so there’s no need to look elsewhere. And if you’re only going to play your slots at Casumo, then why not make your life easier by downloading the app?

The Casumo mobile app is also free to download. You can log in from any device using the same credentials you set up for the desktop site. You can flit between playing from your computer and playing from your mobile devices without affecting your progress in the adventure tab. If you complete one mission on your smartphone and then the next from your laptop, both will be registered in the mobile casino. Every time you load up the Casumo mobile app, you will see your very latest position in the Casumo universe. There’s no lag time. And you can also easily redeem and use Casumo casino bonuses from the mobile app as well.

The Casumo casino mobile games list of mobile slots and other casino games are arranged in familiar thumbnail images. You can quickly browse the list, but a search function allows you to skip straight to a game of your choice too. I’m not as much of a fan of the way that the thumbnails are arranged in on a massive grid with no gaps between the different pictures, that DOES look a bit cluttered. Thinking pragmatically, however, this arrangement makes the best use of the limited space available on smaller phone and tablet screens. Whichever way you access them, few can argue with the number of mobile slot machines and other mobile casino games which you can play at Casumo.

Casumo slots dominate, as they so often do. This is an excellent time to tell you about a funky little filtering option too. If you type the name of one of Casumo’s feature software providers (like ‘NetEnt’ or ‘IGT’) into the game search box, you will see results showing all the online slots and table games from your target provider. It’s an excellent alternative to the usual filtering systems. The only issue I can see with this type of filter is that you need to be familiar with the names of the software providers. If you don’t know your NetEnts from your Yggdrasil Gaming, the feature is, well, featureless. 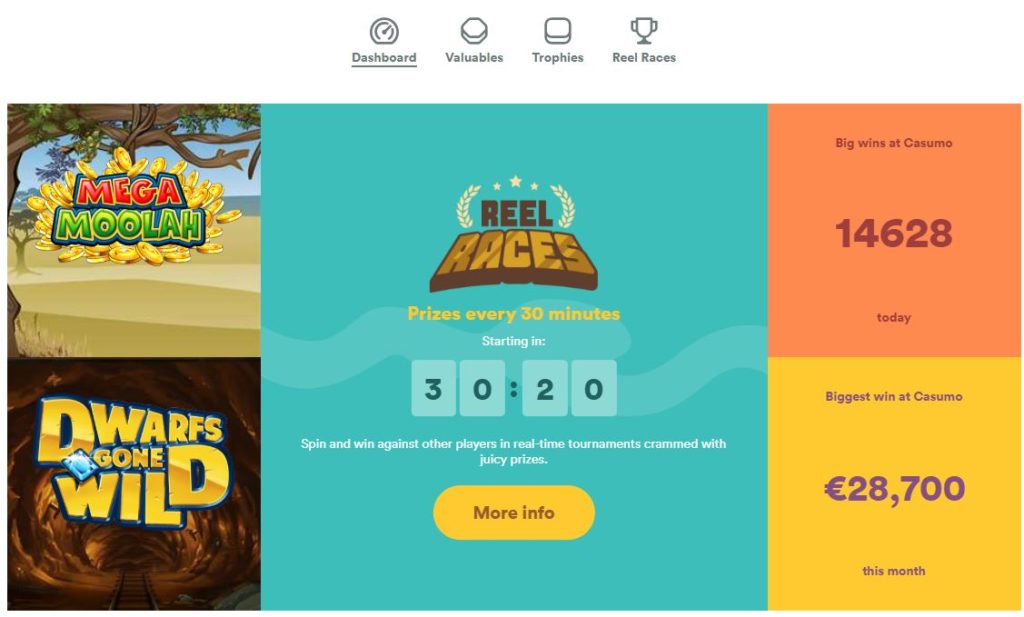 The list games include numerous progressive jackpot slots, including the likes of Mega Moolah, Mega Fortune and Hall of Gods (which was only recently released as a mobile slot), all of which are capable of paying out millions in real cash jackpot prizes. You can also enjoy Casumo’s excellent live casino from your mobile device. The live casino – powered by Evolution Gaming – allows you to join roulette and blackjack games presented by real-life casino dealers.  The live casino games are rather impressive with Dream Catcher, Lightning Roulette, Football Studio, Live Blackjack, Live Ultimate Texas Hold’em, Live Caribbean Stud Poker and Live Roulette to name a few. Bizarrely there seems to be only one NetEnt live game, namely Live Roulette & Blackjack. At 777 Casino we would like to see more than just the Evolution Gaming offerings.

We love the Casumo Casino Mobile site for the same reasons we love the desktop version of this exceptional online casino. The premise is intriguing and engaging. Every session of play adds to the adventure, and you can earn badges, unlock new worlds to explore and compete in daily races. Strip it all back, and you have a very simple online casino under the bonnet; one that wants to put players within an easy touching distance of some of the finishes online video slots in the industry. That Casumo has managed to interesting, unique and simple all at the same time is a testament to the care and attention of the team responsible for this most innovative of online casinos.

Players can use their welcome bonus including 20 no deposit free spins on Starburst in the mobile casino. Other free spins rewards and real cash bonuses can be redeemed on the go as well. Indeed, you’re more likely to benefit from a bespoke, tailored mobile casino bonus for mobile users only than miss out on a significant promotion if you’re a mobile player. The mobile site cements Casumo’s position as one of the very best online casinos on the planet.