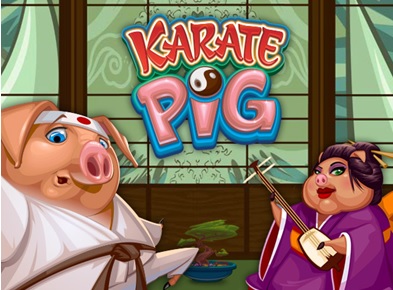 Play Now
New players only - 10 free spins on registration (max withdrawal £100) 1st Deposit 100% up to Maximum bonus is £123 - Max bet with bonus is £5 - No max cash out - Wagering is 50x - Skrill & Neteller excluded - Eligibility is restricted for suspected abuse - Cashback is cash, so no wagering - Cashback applies to deposit where no bonus is included. See more

The MicroGaming team are a talented bunch and we saw they take their jobs very seriously. They’ve produced some of the most famous, universally renowned online slots in the business and built some intricate back stories to support some of them (Immortal Romance anybody?) You know what though? We love it when they go a bit silly. Sure, we all want to win money playing casino games but as is do often true of life, sometimes everything is much so much more enjoyable when it’s utterly ridiculous and makes little sense. That’s the space in which Karate Pig lives, and we consider it one of the best high volatility slots around. It’s all a bit daft. We wouldn’t have it any other way neither.

WHAT IS KARATE PIG SLOT ABOUT?

Karate Pig celebrates that most famous porcine attribute of all – martial arts skills. Yep, we’ve all seen pigs roundhouse kicking each other on farms across the world and now MicroGaming have decided to bring those skills to discerning skills to a wider, online casino audience. I’m being flippant of course but it is another of those slots that leads you to wonder just how drunk the design teams are when they come up with these ideas.

In fact, the eponymous star of Karate Pig isn’t just proficient in combat. He’s a chef, he’s a musician, he’s a thinker and he’s a benevolent boar who is capable of dishing out some serious cash. Creativity is at work all over this gripping little online slot. Combined with some weird and wonderful bonus features, they’ve ensured that Karate Pig is a firm favourite at Preferred Online Casinos HQ. We think it’s one of MicroGaming’s very best creations.

Karate Pig has enough features to fill a pork bap, and MicroGaming have applied some Apple Sauce too in the form of a Final Showdown Bonus that could leave you as happy as a pig in mud. The standard main games features include stacked wilds and scatter symbols, and there’s a lucrative free spins round as well. We also love the bespoke bonus game, which is one of the most enjoyable of any MicroGaming slot.

The Karate Pig symbol not only replicates those around it (other than scatters) to form winning lines but it can also form stacks covering several rows, giving you a much better chance of a big win. If five wilds appear in a single spin, you also win a whopping 10,000 coins.

You only need 2 gold scatter symbols to gain entry to the Karate Pig free spins round. This is probably the feature that’s most likely to win you the really big bucks, as is so often the case with free spins. There are up to 80,000 coins up for grabs and you get a generous 15 casino free spins to play with. Perhaps best of all, any win is automatically doubled during free spins.

Karate Pig’s donned his chef’s hat and sharpened his carving knife in preparation for the other type of scatter symbol that you can achieve during the game. Get three of them and you’re off into the bonus round, where a choice of games awaits. One is called the Pork Chop Bonus and the other is the Hammer Bonus. Both share three things in common: a) they are essentially pick and click games; b) you can win some great cash prizes playing either and c) they give Karate Pig the chance to show off his talent. Expect to see him karate chopping some ingredients and cooking up some culinary delights. It seems he can even headbutt his way through solid ice. Not bad for a hog. Throughout the game, you get to gorge on some great prizes.

Every time you complete one of the Karate Bonus games, you earn a belt. Proceed through 7 rounds and you make it all the way to black belt status. Once that’s done, Karate Pig dons his best whites and goes head to head with Razorback, a fierce looking field if ever you saw one. This is a fight to the death and you can use Karate Pig’s array of moves to defeat his foe and win the jackpot.

WHAT ARE YOUR CHANCES OF WINNING ON KARATE PIG?

The gameplay is so much fun and it’s easy to forget that you are playing for cash at times. The bonus game will give you a timely reminder. Every time Karate Pig chops his way through a barrel or ice block to reveal the riches inside, you’ll add to your bank balance. It’s classed as a high variance slot but it errs towards mid-variance for us. The stacked wilds will help you keep your cash pot ticking over and there are 40 paylines so plenty of opportunities to keep the cash pot ticking. It’s the free spins round and bonus game that will keep you on the edge of your seat, however, and you’ll need to be patient

OUR VERDICT ON THE KARATE PIG SLOT

We said at the outset that Karate Pig is one of the 777 Casino favourites and we hope you see why now. It’s a creative, wacky and entertaining game that’s impossible to dislike. The eponymous character is great value, while those bonus games can keep you entertained for hours. It’s a game that draws you in and you will find yourself sticking around to try and collect those karate belts. Granted, you might need to exercise some patience to hit the sizeable sums but that’s much more palatable when a slot is so much fun to play. Despite the fact that it’s not available for mobile devices yet – which is a shame – we strongly recommend that you take guard alongside the ultimate pork chopper and take a few spins on Karate Pig. You’re likely to enjoy it.

Play Now
Play Now
New players only - 10 free spins on registration (max withdrawal £100) 1st Deposit 100% up to Maximum bonus is £123 - Max bet with bonus is £5 - No max cash out - Wagering is 50x - Skrill & Neteller excluded - Eligibility is restricted for suspected abuse - Cashback is cash, so no wagering - Cashback applies to deposit where no bonus is included. See more
All British Casino
On Registration