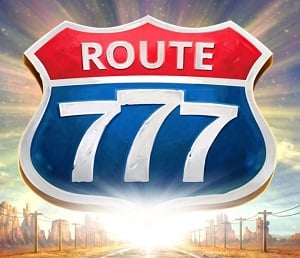 The best casinos to play Route 777

Route 777 is an online slot that draws inspiration from two different sources. Firstly, there are the Great American Highways like Route 66 and Highway 69, which provide the game with its animated design. Somewhat at odds with that, however, is the tribute that Route 777 pays to traditional fruit machines via its choice of symbols. It all adds up to an online slot that looks a bit odd first (and indeed 2nd, 3rd and 4th) glance, but is remarkably easy to play. It’s an intriguing, contradictory cocktail that’s the brainchild Elk Studios.

I’ll level with you here. When I first opened Route 777, I thought something had gone awry and the game hadn’t loaded properly. It features such a strange mesh of ideas that it almost looks half finished at all. The backdrop is well rendered, featuring a large road that disappears into the horizon. But a 3×3 reel grid has been placed on top of it, and doesn’t fill the screen either horizontally or vertically. It just doesn’t seem to match the theme of the game. Stranger still is the presence of a heavily pixellated screen above the reels. It’s designed to look like an old fashioned scoreboard, and the features moving images that change if you win.

Now that board features various images of vehicles, roadkill, and scorpions that are at least reminiscent of big American drives through the mid-West. They even feature some tumbleweed, which will seem strangely ironic if you’re on a losing streak. The screen just looks bizarre though, sitting above the game grid with its classic fruit machine symbols (mixed with a few skulls and other ‘biker’ imagery) and atop the Utah inspired background imagery. It shouldn’t work, but here’s the rub. This is one of the most maddeningly moreish online slots we’ve played in ages. Once you’re used to the odd appearance of the slot, it’s a really engaging game. You’ll even come to love its weird looks and the fact that it’s apparently three different design ideas squeezed into one. Or at least we did, anyway.

Route 777 features a couple of standard bonus features along with an interesting function that allows you to choose a betting strategy. That’s designed to allow different players with different approaches to gaming to tailor their experience accordingly. It’s an interesting concept that Elk Studios seem keen to explore, and it’s great to see a design house that’s prepared to experiment with new ideas. The two bonus features aren’t bad either and can help you chalk up some potentially lucrative wins.

These are standard respins with a bit of a twist, but you have to work hard to trigger them. We played for quite some time before we managed to land the feature. The action kicks off if you manage to land matching pairs in all three positions on reels one and two. Rather than freeze, those symbols will then shunt down a position each time you take a respin, while the third reel spins freely. If it lands in your favour and creates a winning line or two, you get the windfall.

What an interesting idea. Choose from four betting strategies before you even take a spin on Route 777. The Optimizer strategy is aimed at high rollers and automatically changes your bet level according to your balance. The more you win, the more you’ll risk, but the opposite is true as well.

The leveller strategy, meanwhile, raises your bet level after 5 consecutive losses and can reach a total of 10 times your bet level until you win and your bet resets. The booster strategy is similar but raises the bet by a single amount after an individual loss. If you don’t like any of the strategies, you can just play Route 777 normally and make all the decisions for yourself.

WHAT ARE YOUR CHANCES OF WINNING ON ROUTE 777?

Your choice of strategy will directly affect your chances of winning too. The high roller option can quickly turn a losing streak into a glorious windfall, but there’s a flip side of course. If your luck doesn’t turn, your losses will accelerate. It’s not for the fainthearted. In truth, even if you don’t apply one of the strategies to your session, then Route 777 is still a highly volatile game. It’s been designed as such. If you want slow and steady, go elsewhere. This online slot is much more interested in thrills and spills.

To underline the point, it’s possible to win 400 times your stake from a single spin. If you bet at the highest level (£100 per spin), you could walk away with some seriously sagging pockets. Yes, it’s a simple 3×3 slot with basic graphics and classic fruit machine symbols, but don’t doubt the excitement that a big win can bring to your gaming session. As ever with volatile games, though, you could equally go a long while without a win of any significance at all. It’s about setting yourself limits and holding your nerve. There’s no doubt that the game’s behaviour, and the potential for a humongous win or two, will attract serious interest from thousands of players.

OUR VERDICT ON ROUTE 777

Well, what an odd but exciting little game. The theme is truly bizarre. It’s like they got half way through the design then got bored and just used some old designs from the cutting room floor to finish it off. Then you start playing the game and suddenly the hot potch way that it’s been pieced together is absolutely part of the charm. Playing Route 777 is genuinely exciting and you always sense that a big win could be around the corner. Of course, the potential rewards are massive too. High volatility games always gain the respect of ‘serious’ players much more readily. We don’t like to be snobbish here at 777 Casino, and will always extol the virtue of lower variance games too. They just appeal to a different market. However, there’s something particularly engaging about a volatile game like Route 777. You won’t expect to love it when you first see it load, but you just try and drag yourself away again.