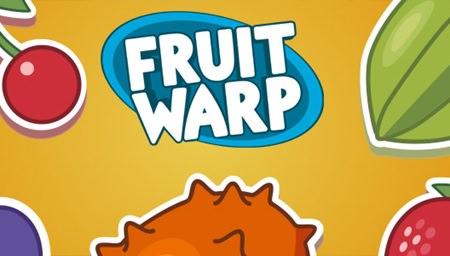 Any game that uses fruit images as symbols is treading a familiar path, right? One that harks back to the smoky pubs of a bygone ear, and their land-based ‘fruit machines’ featuring lemons, cherries, and grapes, plus the odd BAR sign? Well along came Fruit Warp to change your perceptions and, in doing so, cement Thunderkick’s reputation as the quirkiest game provider in the industry. Indeed, this game is only a ‘slot’ by tenuous association. It doesn’t have any reels, it doesn’t have any structured layout, there are no paylines, wilds or traditional free spins. It’s fruity by name and kooky by nature… But most importantly, is it any good?

WHAT IS THE FRUIT WARP SLOT ABOUT?

Written down on paper, Fruit Warp sound ridiculously complicated. You really need to play it to understand the beauty of its unconventional approach and downright eccentricity. Yes, you win by ‘matching’ fruit symbols, but they are barely symbols at all. Each round begins with a blank screen. Touch the ‘spin’ button and a bunch of fruit comes zooming into the view. As the fruit gets nearer, it becomes suspended it bubbles. At this point, you’re hoping that you have at least three matching types of fruit, or else you haven’t won.

We say you want to match three fruits but that’s barely worth it in truth. The wins for 3 matching fruits (in any sequence) are small. Match four, however, and things get a little more interesting. Yep, a combination of four activates the ‘Fruit Warp’, where non-winning symbols disappear into a vortex, to be replaced by a fresh batch of symbols. If any match your initial foursome, you create a combination of five or more. That triggers Fruit Mode, where the good stuff happens.

Fruit Mode is the game’s only major feature of note. The fact that Fruit Warp remains so compelling is, therefore, a testament to the Thunderkick design team, and whatever hallucinogenic drugs they take before coming up with these ideas. We’ll describe it as a casino free spins round, although it isn’t really a free spins round at all. We just need to give it a name and it’s the closest descriptor we have in our locker. We’ll try and explain a bit more, but let’s flesh out the feature that gives the game its name first.

It’s worth reiterating 3 symbol matches earn you next to nothing. Indeed, unless you activate the Fruit Mode, there is very little to be gained from this game. All roads lead to the game’s core feature and that includes the Fruit Warp bonus.

As we already mentioned, it’s triggered by four matching symbols and essentially gives you another crack at a bigger win. Non-winning symbols disappear and are replaced with fresh fruit. You might still end up with a matching foursome but no more, perhaps securing x2 your bet. That’s not what you’re after, though. You want at least one more fruit that matches your winning combination because five or more means Fruit Mode.

Five is the magic number, but the more symbols the match, the greater your head start in fruit mode. Why? Because your winning symbols are immediately transformed into ‘steps’ during fruit mode. The steps form pathways between different multipliers and other features such as extra lives. The aim is to navigate these steps to make it to the next multiplier.

To keep moving, you need to keep landing the fruit symbol that triggered fruit mode. In other words, if you entered the bonus game by matching four bananas, you need at least one banana to appear with each spin to continue in fruit mode. Meanwhile, if you land winning combos of other fruit, the number of matching symbols in your combination is applied to your next multiplier. So, if you land four oranges in a single spin, it will boost your next multiplier from x3 to x7, for example.

In between the multipliers, your steps can lead you to extra life symbols that prolong your bonus round. The extra life sits in the bank until your original fruit fails to appear after a spin. It will grant you another go, with all your multipliers remaining intact. It’s all so complicated that it’s taken an unprecedented three review paragraphs to explain a single feature. We promise that it’s really easy to pick up when you actually play the game, however.

WHAT ARE YOUR CHANCES OF WINNING ON THE FRUIT WARP SLOT?

Fruit Warp is an outlandish game and the fact that its payout potential is so hard to judge seems fitting. We’ve had various experiences. Sometimes, Fruit Mode shows up with a frequency that can turn a Fruit Warp session into a massive money spinner. On other occasions, however, we’ve got yonks without triggering the feature at all – certainly 60 or 70 spins. Such behaviour can be true of any online slot of course, but we can only share our own experience. And that suggests that Fruit Warp is pretty volatile. When you do score a big win, the eccentricity of the game serves to make it even more exciting. You can stake as little as 0.10 or as much as £100 per spin, and it has a theoretical RTP rate of 97%, which is high.

OUR VERDICT ON THE FRUIT WARP SLOT

The power of modern technology has opened all sorts of possibilities for online slots. However, with so many providers in the market, releasing something genuinely different is extremely tricky. Or at least it is for most, but not so Thunderkick. Most of their slots are wonderfully weird, and this one is no exception. It’s the most psychedelic experience we’ve ever had on oranges and bananas, but it’s ain’t half immersive. Perhaps it’s the mesmerised qualities of those floating fruits, but it’s more likely down to the money-spinning potential of Fruit Mode, which categorically proves that one bonus feature is sometimes all an online slot needs.