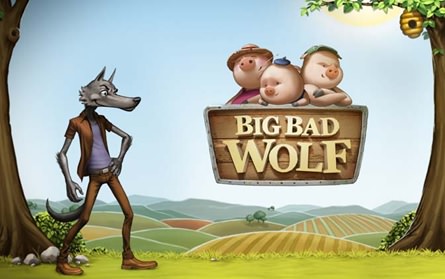 Big Bad Wolf pays tribute to what must rank as the most violent fairytale of all time. But while the story sees two little pigs and the wolf himself meet particularly a grizzy demise, the slot is altogether more cute and cuddly. You’ll side with the wolf as he tries to blow away the reels and turn the little piggies into wilds. But will you be left howling in delight or scratching the hairs on your chinny chin chin?

WHAT IS BIG BAD WOLF ABOUT?

We’re reliably informed that the eponymous Big Bad Wolf appears in loads of children’s fables down the years. We, like most others, know him as a crafty old conniver with a powerful set of lungs and an appetite for pork – and it’s that story that’s celebrated here. For those of you who don’t know, the original tale sees the wolf terrorise three pigs, successfully blowing down a straw shack and a wooden house before eating the porcine occupants. The third little piggy is a touch more resourceful and builds his house from bricks. The Big Bad Wolf tries in vain to blow it down before climbing down the chimney and into a cooking pot. Tarantino would struggle to come up with this level of grit.

The slot incorporates many elements of the story. The reels are arranged in the shape of the first little piggy’s house and every time you land a winning line, the relevant symbols are ‘blown away’. During the free spins, the big bad wolf (who looks more like a skinny, spindly wolf here to our eyes) starts loitering outside the house. Land three moon symbols and he’ll blow away the wooden house (the straw one doesn’t make an appearance) and win you a couple more free spins. Another three moons and the wolf will have enough puff to finally blow away the brick house. That wins you a x2 multiplier and more free spins.

We’ve already started banging on about some of the bonus features in the last section but let’s have a look in a bit more detail. It’s worth reiterating that this a very beautiful looking slot and the features and nicely woven into the animation. Visually, it’s right up there with Quickspin’s best. They could arguably have done a little more with the ‘Blow the House Down’ feature but the free spins round can be a massive money maker.

Every time you land a win on Big Bad Wolf, all the symbols involved in creating the winning line are blown away and replaced with a fresh batch of symbols. If that produces another win, the process repeats itself until your luck runs out. It’s a feature used in other games and on its own, it can help you keep your bank balance topped up. However, the Swooping Reels become really interesting when combined with other elements of the game.

Those other elements include the pigs turn wild feature. There are three types of piggy symbol in Big Bad Wolf, reflecting the trio of pigs who feature in the story. These symbols turn wild after a defined number of winning rounds. The first pig turns wild after two wins, the 2nd after four winning lines and the third after 6. If all three symbols are wild (this is most likely to happen in the free spins round), then the swooping symbols can quite the run of cash.

That casino free spins round represents your best chance of walking away with a trough full of cash. It’s triggered by three matching wolf scatter symbols and you get 10 free spins to start you off. Here’s where you need some piggy wilds to help you create a series of wins. As the symbols continue to blow away, you can easily double or even treble your initial batch of spins.

BLOW THE HOUSE DOWN FEATURE

During the free spins round, moon symbols can appear at random. Collect three and the wolf will blow down the wooden house, awarding you two more free spins. Keep on going for long enough to pocket three more and he’ll tear up the storybook and blow the brick house down. You win 2 more free spins and a x2 multiplier for that but given that it’s no mean feat to land six moons, we’d expect a little more. It feels like the Blow Your House down feature is there as a curiosity rather than a money maker.

You’ll want to send the Pigs wild but while you wait, the standard honeycomb wild symbols will help you create some smaller wins. Furthermore, they can combine with the pig wilds once you have them to help you win more. We’ve had a few prolonged sessions where the standard wilds in Big Bad Wolf have made a big difference. It’s worth watching out for them.

HOW CAN YOU PLAY BIG BAD WOLF?

Quickspin have released a mobile version of Big Bad Wolf. You can play on your iPad, iPhone, Android device or a standard computer. It runs well on all devices although the Blow the House Down feature can cause some minor glitches on older phones or poor internet connections. You can’t question how this game looks though. The characters and all beautifully rendered and the pastel colours look great on any screen size.

WHAT ARE YOUR CHANCES OF WINNING ON BIG BAD WOLF?

There isn’t a huge consensus on this one. It boasts an RTP rate of 97.34% but we’ve still seen it classified towards the high end of medium variance. Some people will focus on the cumulative power of the wilds and (potentially) the swooping symbols, which can help you bag plenty of small wins. However, you’ll need to send the pigs wilds to really benefit from the respin feature and that’s most likely to happen in the free spins round. You’re going to need to get your teeth into the free spins, rack up some wins, send at least two pigs wild and then get on a run with the Swooping Symbols if you’re after a hefty payout.

OUR VERDICT ON BIG BAD WOLF

Quickspin have produced a cracking little slot here. It looks great, boasts some memorable characters and a set of features that interact well with one another. You can make the most of the Swooping Symbols function in your free spins round and it gives you a great chance to win your stake level several times over. You might need to exercise some patience but it’s worth it. Big Bad Wolf has plenty of fans amongst online casinos players and it’s a worthy member of what’s a high-quality set of fairytale themed video slots.