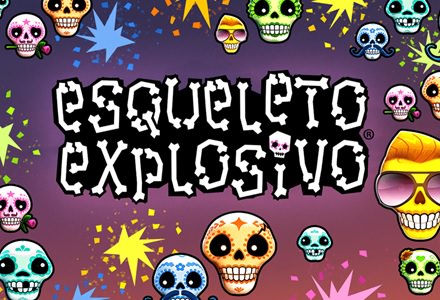 Play Now
The Welcome Bonus is only available to newly registered players who make a minimum initial deposit of £ 10. The Welcome Bonus offer is only available to those who have made their first deposit up to maximum of £ 200. Any amount over £ 200 will not form part of the player’s first deposit. The welcome offer can be activated only once, when making your first deposit. Once you have made your initial deposit, you may choose to activate the Welcome Bonus within thirty (30) calendar days under the 'My Bonuses’ section of your account (found under 'My Profile').Full t&c apply. +18. Play responsibly See more

In our review of NetEnt’s Spinata Grande, we mentioned that Mexicans will find any old excuse for a good old shindig, as evidenced by their Day of the Dead celebrations. Now it’s time for us to introduce the online slot that transports you straight into the middle of the festivities, with some all singing, all partying skulls and a big stack of multipliers. Esqueleto Explosivo is a Thunderkick slot represents all that’s great about the provider. It’s weird, it’s wacky and it’s entirely different to all the other online slots out there. It’s also wonderfully simple to pick up and play, yet devilishly moreish. You probably never expected to sing along with several members of the undead, but we bet you won’t be able to resist.

WHAT IS THE ESQUELETO EXPLOSIVO ABOUT?

It’s the Day of the Dead and you’re in a small side street in a Mexican town. The counterintuitively jolly music is playing in the background only interrupted by the sound of fireworks, dogs barking and crowds chanting as you seek solace in the front room of a local house. A feast is laid out on the table and five headless skeletons are stood at the front of the room; one carries a guitar and another a trumpet. You start spinning the reels and different coloured skulls drop down on to the neck stalks of the skeletons. Welcome to the odd world of Esqueleto Explosivo.

There’s lots to love about the slot, but the theme itself is just fantastic. It’s beautifully done as well, the dimly lit room perfectly complements the brightly coloured skulls, who sing and play their instruments when you drop some coins. Those wins are strongly boosted by a ticking multiplier that grows with each win, allowing you to follow your progress right through until your wins are worth x32 your stake. Expect a hearty tune from these impossibly happy skeletons (I suppose if you’re dead, you’re probably at your happiest on the day that celebrates your departed state). Their spirit is infectious.

We’ve got slightly ahead of ourselves and already touched upon a couple of big features of Esqueleto Explosivo. This is actually a very simple online slot, yet can be incredibly addictive. We say simple because you never leave the main game. There are no scatter symbols, free spins rounds or bonus games. You spin away, wait for a win, watch the new symbols replace the winning ones and hope to make it all the way through the multipliers. One other special symbol will help you get there.

Or Explosivo Wilds, as they’re known here. The wild symbol is the James Dean of the undead, with his slicked-back quiff and retro shades, but he doesn’t stick around for long. As soon as he appears, he explodes, destroying the 8 closest, surrounding symbols. His destructive moves you up a notch on the multiplier scale and triggers the tumbling reels, which can create further wins. Get two Explosivo Wilds in a single spin, and you’ll take out most of the grid.

Tumbling reels have become very popular over the years, thanks to the success of slots like Gonzo’s Quest. Essentially like respins, only better, it means that all the skull symbols in any winning combination disappear (or explode in this case), allowing more to tumble in to replace them. If that triggers another win, the process repeats, allowing you to build up a head of steam.

Each win moves you up a notch on the multiplier scale, and the size of the multiplier rises steeply. From x1, to x2 them x4, x8, x16 and finally x32, you only need 6 consecutive wins to land the biggest gains. This can lead to some whopping great drops, we’ve won well over 100 times our stake. Who needs a free spins round when you have features like this in the main game?

WHAT ARE YOUR CHANCES OF WINNING ON ESQUELETO EXPLOSIVO?

Any game with a built-in multiplier the size of this one offers up some great possibilities for big wins. Our experience tells us that patience is needed, although you’ll hit the x2 and even x4 multipliers with enough regularity to keep you interested (and generate the cash to keep on playing). When you do land the x32 boost, a huge win is coming your way. We haven’t been keeping track, but we feel like we are comfortably in the green from our time playing on this online slot, so if you experience the same luck as us, your prospects are good. The game has an impressive RTP rate of 97.6% as if to prove our supposition, and you can bet between 0.10 and £100 on each spin.

OUR VERDICT ON ESQUELETO EXPLOSIVO

We’ve been fans of Esqueleto Explosivo ever since we first played it. This game boats a quirky theme, superb graphics and an infectious soundtrack that never seems to tire. The gameplay is as engaging as it is simplistic. Our natural inclination is to take a sharp intake of breath when we hear the words ‘no free spins or bonus round’ but this game proves that you don’t always need one. Why? Well, a x32 multiplier in the main game, that’s why. So, we have a game that looks great, plays brilliant and offers great opportunities to win. We love Thunderkick’s style and Esqueleto Explosivo is one of their very best online slots. What’s not to like?

Play Now
Play Now
The Welcome Bonus is only available to newly registered players who make a minimum initial deposit of £ 10. The Welcome Bonus offer is only available to those who have made their first deposit up to maximum of £ 200. Any amount over £ 200 will not form part of the player’s first deposit. The welcome offer can be activated only once, when making your first deposit. Once you have made your initial deposit, you may choose to activate the Welcome Bonus within thirty (30) calendar days under the 'My Bonuses’ section of your account (found under 'My Profile').Full t&c apply. +18. Play responsibly See more
Mr. Play Casino
On Registration