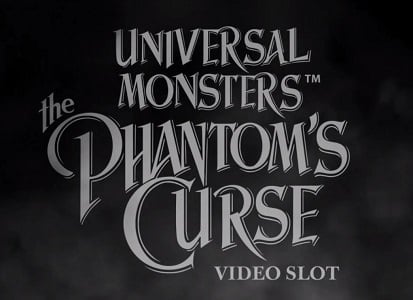 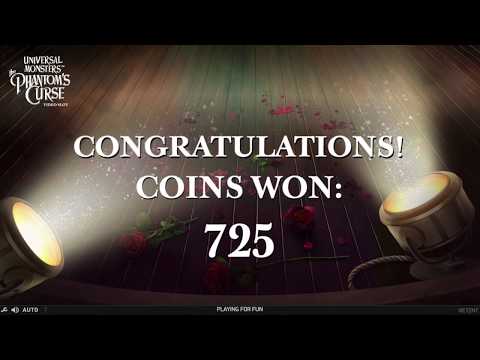 The best casinos to play The Phantom’s Curse

Claim Here
Welcome bonus for new players only | Maximum bonus is 100% up to £200 | 5 free spins on registration (max withdrawal is £100) | No max cash out on deposit offers | Wagering is 35x bonus | Maximum bet while playing with a bonus is £5 | Cashback is cash with no restrictions | Bonus excluded for player that deposit with Skrill or Neteller. See more

Universal Monsters: Netent The Phantom’s Curse is a five reel, three row online slot from NetEnt, which was finally released in January 2018. I say ‘finally’ because the game was originally scheduled for launch in the summer of 2017. However, MicroGaming put a stop to that. Having acquired the rights to the 2004 Hollywood version of the Phantom of the Opera, they weren’t best pleased that their chief rivals NetEnt were about to undercut them with a game that followed the same theme and had the same name. They objected, their concerns were upheld and NetEnt were forced to delay the release. Now the game is finally here, but given its complicated history, is it worth the wait?

WHAT IS THE UNIVERSAL MONSTERS: THE PHANTOM’S CURSE ABOUT?

In anything, the saga that developed between NetEnt and MicroGaming demonstrated how complicated licensing laws can be in this industry. MicroGaming may have the rights to the Gerard Butler film, but NetEnt have secured access to the Universal Monsters, the collective term a host of characters introduced by Universal Pictures in the 1920s and 1930s. It’s a franchise that includes other well known film icons such as the Hunchback of Notre Dame, The Invisible Man and Bride of Frankenstein. So, we can expect some more games in this series, as is often NetEnt’s approach. Perhaps it’s telling that they concentrated on the Phantom first though. It was always likely to put MicroGaming’s nose out of joint!

As you’d expected, the game is speckled with references to its core subject matter. The phantom himself appears in two different symbols, both of which play a key role in the game. The story’s primary antagonist Christine also gets her own symbol, and there are other references too, such as a looking glass, a flower and a ruby ring. The action is set against the backdrop of the opera house and there’s an animated video introduction which provides some context for those unfamiliar with the musical or any of its various spin off films. A suitably dramatic soundtrack accompanies the visuals to add a cherry on top. The game is as faithful to its theme as any other.

Some of NetEnt’s recent releases have incorporated some truly unique features. Planet of the Apes has two different grids of reels spinning simultaneously while Finn and the Swirly Spin has a unique layout featuring symbols which move incrementally towards the centre of a massive swirl. Even Twin Spin Deluxe employs the Cluster Pays format that NetEnt has used in other games. It was beginning to look like every new release would find a new way of abandoning tradition. In comparison to those titles, however, Universal Monsters: The Phantom’s Curse is a much more conventional affair. It’s laid out in a familiar 5×4 reel structure and boasts 40 fixed paylines. It’s the selection of bonus features that provide the unique flourishes. There’s nothing here that you won’t find in a slightly different guise elsewhere. But collectively, they elevate Universal Monsters: The Phantom’s Curse to a much more appealing prospect.

The two different phantom symbols combine to provide the game’s first feature. You will receive one respin when the main phantom stacked symbol appears on the first reel at the same time that the masked phantom symbol appears on the fifth reel.  Yes, one respin seems stingy at first but given that both the stacked symbols turn into wilds first, you stand to land a very decent win for very limited effort.

I do love a good pick and click game, and this one is up there. Perhaps I’m a sucker for a gimmick, but it’s always fun to play a game within a game. This one has the added bonus of being split into two stages. First, you pick one of 8 roses. Behind those sit either coin wins (not too shabby) or x symbols (potentially even better). The x symbol moves you on to the next stage of the game, where you’ll pick one of three looking glasses. That ultimately provides you with a multiplier that can truly jazz up the rest of your game.

The Universal Monsters: The Phantom’s Curse free spins round provides a great opportunity to rack up some cash. It’s also punctuated by some interesting graphics. When you trigger the free spins, a chandelier rises above the reels. A separate fastening sits above each line and the phantom will cut the wires one by one every time you land his own symbol. When you’ve severed all the wires, all the masked phantom symbols on the grid transform into stacked wilds as you work your way through the free spins.

WHAT ARE YOUR CHANCES OF WINNING ON UNIVERSAL MONSTERS: THE PHANTOM’S CURSE

As you’d expect, the bonus features provide you with your best chances of winning significant sums of cash on Universal Monsters: The Phantom’s Curse. However, the wins do come along frequently in the main game as well. For that reason, we’d class this towards the high end of the low-medium variance slots in the NetEnt collection. They do tend to make slots that are suitable for all much of time. Again, beginners will pick up the gist of the game really quickly, most players will find the features engaging and exciting while more serious gamers will appreciate the opportunity to win up to 160,000 coins with a maximum of 4000 coins available from a single line win.

OUR VERDICT ON UNIVERSAL MONSTERS: THE PHANTOM’S CURSE

Universal Monsters: The Phantom’s Curse was worth the wait. It may lack some of the pizzazz of other recent NetEnt releases but its classic, solid main game is complimented by some standout bonus features. Both the pick and click game and free spins round are excellent, and the latter is aided by some excellent visuals too. The video clips provide plenty of context while the game’s central theme is followed faithfully. For all that, I’m not sure I’ll return to the game as often as I will revisit Planet of Apes or Finn and the Swirly Spin, but that only suggests that NetEnt is sometimes the victim of its own success. This is still a cracking game in its own right and well worth some spins at your favourite NetEnt online casino.

Claim Here
Claim Here
Welcome bonus for new players only | Maximum bonus is 100% up to £200 | 5 free spins on registration (max withdrawal is £100) | No max cash out on deposit offers | Wagering is 35x bonus | Maximum bet while playing with a bonus is £5 | Cashback is cash with no restrictions | Bonus excluded for player that deposit with Skrill or Neteller. See more
Casumo
On Registration