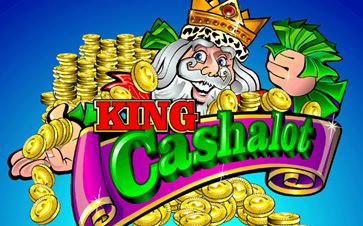 King Cashalot is a Microgaming jackpot slot, which tends to live in the shadow of the provider’s other big bucks super slot, Mega Moolah. It certainly doesn’t enjoy the same level of notoriety as that game. That’s reflected in the size of the jackpot that’s typically won on the game too. Let’s not disparage King Cashalot in this regard though, players have still one in excess of £1 million in a single jackpot drop while playing the game. There’s another reason to love it too. You still qualify the biggest jackpot even if you stake the lowest amount, so it’s accessible to everyone. This is not always the case. Indeed, many jackpot slots tread a more traditional path whereby you can only win the biggest prize if you stake the maximum amount.

WHAT IS THE KING CASHALOT JACKPOT SLOT ABOUT?

Of course, the millionaire-making potentially of jackpot slots is their major attraction. However, the design studios work hard to ensure that they offer excellent gameplay too. If they were dull or poorly designed, folk wouldn’t stick around for long enough to build up the cash pot. The jackpot amounts would suffer accordingly as a result, so it creates a vicious circle. Of course, lots of factors contribute to the playability (or otherwise) of an online slot. Most people will point at the bonus features immediately. but that’s not how you develop a first impression of any game. Rather, it all starts with the theme and appearance of the slot, and King Cashalot is in unique territory there.

It adopts a regal, medieval theme inspired by a time when Kings wore gold growns, rode horseback and ate copious amounts of meat around massive banqueting tables. Think Robin Hood, or Braveheart. It approaches the theme with a jovial attitude, that said. The symbols are brightly coloured and rendered in a cartoon style that’s typical of MicroGaming. It’s the symbols themselves that flavour the theme. King Cashalot is the wild, while the Queen, dashing Knight and Damsel in Distress are all high value. Various foods round of the line up, including a massive ham hock and a full-size chicken. Veggies, don’t despair. There’s a massive plate of fruit as well. All in all, the game looks good if a little dated. The subject matter is a little different, although historical themes aren’t unknown across other online slots. It’s all good fun, and it lends the game a catchy name that sticks in your brain box.

Like any other jackpot slot game, most of us will play King Cashalot in the hope of winning a huge windfall. However, events of that magnitude are naturally rare, so game studios work hard to ensure that their progressive jackpot slots stand alone as excellent games in their own right. To make that so, the games require some special bonus features that a) provide additional excitement and b) give players the chance to keep their bank balance ticking over while they wait for the biggest prize of all to fall. King Cashalot is no different, and its bonus features reflect MicroGaming’s gameplay philosophies. There are a couple of traditional features that you’ll see elsewhere, as well as an excellent ‘stick or twist’ style bonus game that’s a little more unique. The features can help you win a tidy sum of money if the reels fall in your favour.

We mentioned Braveheart earlier in this review, and those of you have seen the film will notice the visual similarity between King Edward the Longshanks and King Cashalot. Both wear a bejewelled crown atop a mane of grey hair and sport powerful beards, although that’s where the similarities end. Unlike Longshanks, King Cashalot is an incessantly jovial character who welcomes you with a jolly smile during the game’s intro. You’ll hope to see him during the main game too because he’s the wild symbol. That means he can substitute with any other symbol to form winning lines and ring in the cash. The King Cashalot symbol also controls the jackpot, but more on that later.

No medieval regal themed game would be complete without a court jester, so it’s only right that King Cashalot makes use of one here. The jester is the scatter symbol here and triggers a potentially lucrative free spins. You only need a paltry two scatters to earn a crack at the bonus round, but the more you land, the more free spins you get. Indeed, if you land five from a single spin – as unlikely as that may seem – you earn a whopping 50 free spins for your troubles.

The Treasure Chest Bonus Game is our favourite of the King Cashalot special features. Not only is it a bit different, but adds a bit of jeopardy to proceedings. Indeed, it will appeal to the risk-taking gambler in all of us. The dragon symbol – which can appear on reels 2 or 4 – triggers the game. If you land one of these symbols from a winning spin, then you open up a pick & click game. You must choose which of three treasure chests to open, revealing the contents inside as you do so. You’re then faced with a conundrum. Either stick with the prize you’ve won or forsake it in favour of opening one of the other treasure chests instead. It definitely adds a bit of spice, but don’t expect to trigger the game too often.

HOW DOES THE KING CASHALOT JACKPOT BONUS GAME WORK?

For all the fun of the bonus features, the jackpot itself is the star of any progressive jackpot slot. That’s especially true when the jackpot is available to anybody, no matter what level their stake. Like Mega Moolah, your chances of winning the jackpot theoretically rise if you stake higher amounts but people have won the big prize despite only betting 50 cents per spin before now. It’s a prize that’s open to everyone.

As we mentioned earlier in the review, the King Cashalot wild symbol controls the jackpot too. Unlike many of its peers, there’s no special jackpot bonus game in place. Indeed, the jackpot is available from the main game. Don’t get your hopes up too high because this is still a difficult jackpot to win. You need to score a full house of five matching King symbols across a single payline to take home the big prize.

WHAT ARE YOUR CHANCES OF WINNING ON KING CASHALOT?

Like any video slot, King Cashalot is controlled by Random Number Generators. This means that your chances of winning the big prize lie in the hands of fate and nothing else. However, you don’t need massively deep pockets in order to qualify for the jackpot prize on this game, which immediately makes it appealing. This feature of the game allows you to play for longer in pursuit of the prize rather than blow your beans on the highest stake level and one or two shots at glory. That point alone ensures that normal players, not just high rollers, have a better chance of winning the King Cashalot jackpot than they would on other games.

The popularity of Mega Moolah has a definite impact upon King Cashalot. Progressive jackpots grow quickly if a lot of players play them because a small percentage of every stake adds to the prize pot. Mega Moolah’s jackpot often soars at breakneck speed, while King Cashalot builds much more steadily. Historically, the jackpot falls once every 170 days or so for an average payout of just over £700,000. However, at the time of writing, 10 months have elapsed since it last dropped. You’d have to expect King Cashalot to fall soon on that basis. As ever, you can never expect to win a jackpot. They are hard to win, otherwise, we would all be millionaires. But play for fun, enjoy the other bonus features and keep your fingers crossed. Somebody’s luck has to be in eventually.

OUR VERDICT ON KING CASHALOT

King Cashalot lives in the shadow of MicroGaming’s other progressive jackpot slot Mega Moolah. However, this is a fun slot with an enjoyable theme and a stack of bonus features that make it a great game in its own right. You can play for the main jackpot amount no matter how high or low your stake, which is hugely appealing. Plus, the pick and click game and free spins round ensure that you have chances to win significant sums even if you’re not jammy enough to land the main prize. Although the average jackpot payout on King Cashalot is £700,000 odd, it has made paid out seven figures on numerous occasions in the past. It may not steal the headlines too often like Mega Moolah and Mega Fortune, but it’s a valuable addition to the jackpot slot catalogue at any online casino.