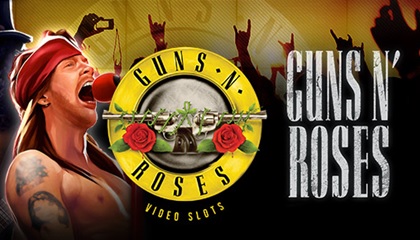 Guns N’ Roses attracted unprecedented levels of anticipation ahead of its release back in early 2016. The pre-release marketing campaign gathered unstoppable momentum, fuelled by typically creative marketing from NetEnt and the excitement of the band’s huge fanbase. Such attention can be a poisoned chalice, the hype is not always easy to satisfy. You can bet your last coin that NetEnt would do everything in their power to pull it off, but just how successful were they?

WHAT IS GUNS N’ ROSES ABOUT?

The band need little introduction unless you have been living in a well sound-proofed cave for the past three decades. Their brand of hard, riff-heavy rock music ensured they were one of the biggest bands in the world during their heyday and their reputation has endured. They were and remain, great entertainers, making them perfect fodder the first in NetEnt’s trilogy of ‘Rock Slots’.

This is no passive tribute to Guns N’ Roses the band. A grandiose video introduction featuring video slips and the unmistakable, pleading intro of Sweet Child O’Mine sets the tone plenty more follows. You can customise the soundtrack to play your favourite from several songs in the Guns N’ Roses canon and the symbols feature the different members of the band. The slot has a fairly standard 5×3 layout but is inundated with a stack of unique ‘rock star’ features that encapsulate NetEnt’s attempts to ensure this is a great, unique game in its own right, rather than a mere homage.

The theme will attract both fans and casual admirers of the band. It will also ensure they keep coming back for a while. But it’s the gameplay that will ensure that players to start to count the game amongst their favourites. Guns N’ Roses is packed full of them, with an incredible level of variety on display. It seems odd to say, but the only criticism you might level at the game is that there are almost too many features so it may seem a little unfocussed. We’re not about to dwell on that, here’s a brief rundown of each one:

No, they didn’t call them Sweet Wilds O’ Mine, because they clearly aren’t as clever as us. But they are pretty sweet for sure, cropping up as Guns N’ Roses logos and expanding to fill entire reels. They then mirror neighbouring symbols to create winning lines.

Named after the band’s most revered album (although we like the one about the spaghetti best), these randomly triggered wilds appear as skulls on a crucifix and take over the game grid to create multiple winning lines.

Celebrating Slash’s screeching solos seems a sensible move. This feature pays fitting tribute, allowing you to earn multipliers between x4 and x10. Again, they pop up at random but will only appear when you’ve already created a winning line of at least three matching symbols.

The third of the randomly triggered features is probably our favourite of the trio. Land this little beauty and you’ll rack up three free spins. Furthermore, each spin generates stacked wilds across entire reels. The wilds behave as you’d expect, substituting for symbols to boost your bank balance.

Land three vinyl record symbols and you rock your way into the bonus wheel round. This feature is the one players will most want to land and can result in one of three different bonuses:

HOW CAN YOU PLAY GUNS N’ ROSES?

Guns N’ Roses is a multi-platform slot that’s available for Windows, Macs, Android devices, iPhones, iPads, you name it. It’s an immensely popular slot so casinos want to stock it. If a site has an affiliation with NetEnt, the chances are that Guns N’ Roses will be featured in its games grid, even if their NetEnt collections is fairly small. It’s one of the most successful new releases of recent years and occasionally pops up in free spins offers.

WHAT ARE YOUR CHANCES OF WINNING ON GUNS N’ ROSES?

If you want to win big on Guns N’ Roses you’ll need to land some of the features. That may seem obvious, but it’s worth reiterating because you can’t expect to land the Legend Spins or Bonus Wheel every time you spin. However, the slot has an impressive RTP rate of 97% and you can expect to pick up some smaller windfalls to keep you topped up. Such versatility makes it a great slot for all types of players. It’s a classic medium variance game.

OUR VERDICT ON GUNS N’ ROSES

Given the fanfare that accompanied its arrival, Netent really did need to make Guns N’ Roses good. You can’t fault their dedication to the cause in that regard; they’ve included an incredible number of features. It can be frustrating waiting for one to pop up because the game lacks a bit of interest without them unless you are a huge fan of the band of course. That said, it looks good and sounds fantastic (naturally) and little wins arrive regularly to keep you interested. When you do start hitting the features, this quickly becomes one of the most exciting games around. It’s deserving of its reputation as one of the most enjoyable online slots if recent years.