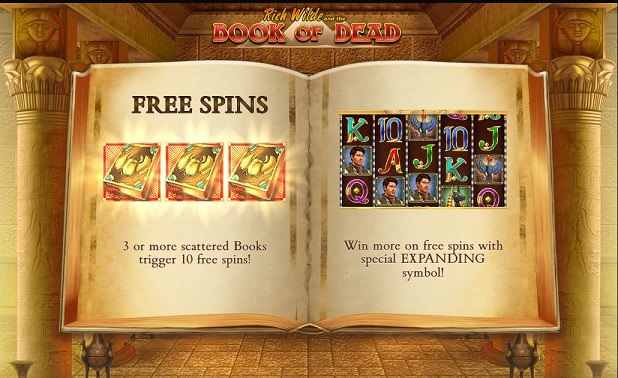 The best casinos to play Book of Dead

I must admit, I hadn’t played Book of Dead until recently. It seems odd because I love Play N’ Go’s catalogue of games and I knew about the game (as well as others in the ‘Rich Wilde’ series), but I’d never spun a dime on it. Recently, however, it quickly became apparent that this is one of the hottest games in the industry at the moment. Players seem to love it, and I had to see what all the fuss was about. It’s become a bit of a staple in the 777 Casino office in recent months as a result, and we’ve learned to appreciate it as much as others. It’s a high volatility game with a huge jackpot prize. If you want to play for a big win without hitting the jackpot slots, look no further.

WHAT IS THE BOOK OF DEAD ABOUT?

Those of you who are well versed in the various online slots out may well notice the similarities between Book of Dead and Novomatic’s Book of Ra Deluxe slot. Now, this industry is a bit mental. Lots of ‘similar’ games from different providers exist. After all, the two biggest suppliers in the business – MicroGaming and NetEnt – released Emoticoins and Emoji Planet in the same week this summer. Games with near identical themes! However, by any standards, the similarities between Book of Ra Deluxe and Book of Dead are too striking to be a coincidence.

Both are set in dusty old ancient Egypt and follow the travels and travails of a rugged explorer as he roams ancient tombs in search of treasure. Book of Dead actually sees the return of a familiar Play N’Go character – the cheesily named Rich Wilde – as he embarks on his latest adventure. Given the similarities between the two games, as well as Novomatic’s excellent reputation, that Book of Dead is a better game speaks volumes for the design team behind it. The slot looks slicker and plays really well. It only has a handful of special features, but they’re good ones. And it’s a highly volatile slot that rewards patience with big wins if you have the nerve for it.

Indeed, the volatility of Book of Dead is bound to appeal to high-risk gamers and those who like to play for a big win. Like NetEnt’s Dead or Alive, you might fritter away some cash in pursuit of a sizeable payout. This is no Starburst, so don’t expect to spend £1 to make 95p every ten minutes. That said, Play N’ Go have built a couple of handy bonus features into Book of Dead, and each can help you achieve a distinct goal. There are wilds to help you form some winning lines and keep that bank balance ticking over if possible. But then there’s a free spins round – triggered by an exciting expanding scatters feature – that can earn you more significant sums of cash.

WILDS ARE SCATTERS TOO

Unusually, the wilds in Book of Dead are also scatter symbols. In other words, they serve a dual purpose. Coming in the form of a Golden Book of the Dead, they will mirror adjacent symbols to form winning lines where possible. Perhaps more excitingly, especially for those of you who are chasing a big pot of gold, the same symbols also trigger the free spins round if you achieve three at the same time from a single spin.

EXPANDING SYMBOLS AND FREE SPINS ROUND

Three or more standard wild/scatters will trigger the free spins round, and you receive 10 free spins by default. When the feature starts, one symbol is picked at random to be the ‘expanding symbol’. Effectively, this symbol expands to cover a whole reel and will payout on any winning lines that form as a result. However, it’s possible to earn 3, 4 or 5 expanding symbols at the same time on subsequent spins, which can prove incredibly lucrative. In fact, the feature can apply to the very highest value symbols and presents you with your best chance of huge payout. It’s the one to look out for, so move to the edge of your seat should you trigger the free spins round. This is where you can fill your coffers on this high variance slot.

WHAT ARE YOUR CHANCES OF WINNING ON BOOK OF DEAD?

As we’ve made abundantly clear, Book of Dead is a high variance (or volatile – you pick the lingo) online slot. It’s lightyears away from other Play N’ Go games like Troll Hunters and Energoonz in this regard. You can spin and spin and spin without any significant success at all but then boom, you hit the free spins round and a couple of reels worth of expanding symbols and the earn your money back with significant interest. If you’re looking to dilly dally your way through a long gaming session, gradually building a prize pot that’s likely to even out over time, then this probably isn’t the game for you. However, if you’re chasing the sort of individual win that makes you pull your underpants over your head and forget any previous losses (because they’ll probably pale into insignificance anyway), then load it up.

We’ve scored some good sized wins on this game, but we know people who done even better than us. Its volatile reputation is earning it plenty of attention, and it’s how it came to ours. Recent statistics from some of the biggest and most respected online casinos in operation prove that that Book of Dead is increasingly becoming a player favourite. It’s little surprise, given the rewards on offer. Despite its volatility, it still offers a 96.21% RTP, which is always a good sign for a game of this nature. The maximum win? A whopping 500,000 coins. Given that you can stake between 0.10 and £100 on each individual spin, it provides bank loads of lucrative potential.

OUR VERDICT ON BOOK OF DEAD

Book of Dead is one of the most exciting new online slots of recent years. Sure, it’s rather ‘borrowed’ its theme from elsewhere but few will care about that. For a start, it looks great. Secondly, it makes sparse but highly effective use of its special features, in true Play N’ Go style. Most pertinently, however, it’s volatile reputation and huge maximum payout amount ensure it will appeal to a huge section of serious players. Few standard slots can match its ability to make you rich, if you can hold your nerve through barren spells. Like all the best high variance slots, the RTP rate remains high and you never feel like the next big win is totally out of reach. It’s that which makes it stand out from the rest of the Play N’ Go catalogue. And it’s that which has confirmed Book of Dead as one of the fastest growing games of 2017.