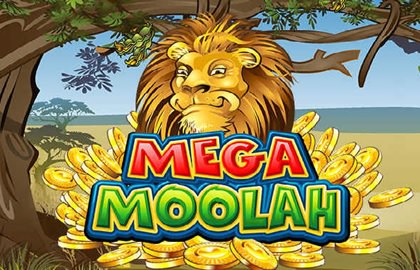 Mega Moolah can lay claim to being the most famous online slot in the world, but why? Is it the fascinating theme? Loads of inventive bonus features? Irresistible gameplay? We’re not saying that it doesn’t boast some, if not all, of those attributes but no, let’s be honest here – Mega Moolah is so famous for one reason. Because it’s capable of making you filthy rich. Yep, this jackpot slot can turn milkmen into millionaires and toilet cleaners into tycoons. It’s a slot for those who dream.

WHAT IS MEGA MOOLAH JACKPOT SLOT ABOUT?

The theme of many jackpot slots is often secondary to their propensity to burp out a 7-figure coin drop. That’s inevitable. But that’s not to disparage the graphics and presentation of Mega Moolah. It’s inspired by the plains of East Africa and the symbols are full of bright colours and charismatic animal symbols. These aren’t the most advanced visuals you’ll ever see, perhaps reflecting the age of the game, which debuted way back in 2008. Indeed, the cartoon styling of the giraffes, zebras and lions remind me of the animations you’ll expect to see on a child’s puzzle. It’s a fun theme that adds to the overall Mega Moolah experience, but they could have included any old subject matter and people would still have played.

That’s because the beauty of Mega Moolah ultimately boils down to its jackpots – and by Jove does it have jackpots. There are four in total and all can be won entirely at random. Every time you play, you are potentially just one spin away from triggering the jackpot game, which leaves the safari theme behind and takes you to a traditional wheel of fortune. The wheel features different colour spokes, representing the four progressive jackpots – Mini, Minor, Major and Mega. The chances are you’ll win the mini if you make it to the jackpot game but who can stop you dreaming of the mega jackpot, which never dips below €1 million? Somebody has to win it.

We’ll expand a little further on those progressive jackpots shortly but Mega Moolah has some other bonus features that keep the main game interesting. Credit’s due to MicroGaming, because even without the prospect of a million quid drop, it’s an engaging little game with a few tasty bonus features. These beauties will help top up your cash pot at regular intervals so you can keep playing for the big prizes.

The wild symbol is a lion, who purrs when he substitutes for other symbols to create winning combinations. Wild wins pay double on Mega Moolah and they tend to come along at regular intervals. They’ll keep you ticking over while you dream of those progressive jackpots.

FREE SPINS ROUND WITH X3 MULTIPLIER

Talking of which, the Mega Moolah free spins round is on a par with those found in standard video slots. Three or more wise monkey scatter symbols (we’re told they’re monkeys, they look more like goblins to us) activate 15 free spins, which can be retriggered if you land 3 more scatters during the round. Best of all, wins are tripled during free spins thanks to a lucrative x3 multiplier. If you don’t win a jackpot, you can still fill your pockets here.

Let’s get back to those lovely jackpots and dig a little deeper. Let’s start by saying that the concept of 4 different progressives in one game is unique it itself and has helped further Mega Moolah’s reputation. Of course, everybody craves the Mega jackpot, although the Major jackpot is a juicy one too. You’re most likely to win one of the smaller pots, but your adrenaline will be pumping if you trigger the wheel of fortune.

Most of you will be familiar with how progressive jackpots work. A small percentage of every wager made on the game contributes towards the big prize, which continues to grow until it pops. In the case of Mega Moolah, those wagers contribute towards 4 independent jackpots of varying levels:

WHAT ARE THE CHANCES OF WINNING ON MEGA MOOLAH?

You know what’s so exciting about Mega Moolah’s use of four jackpots? It means that the jackpot game comes along more often. Sure, you’re most likely to swan off with the mini jackpot, which is won regularly and rarely reaches true ‘jackpot’ amounts. That’s not the point though, because the concept adds to the excitement of the game.

It strikes a nice balance between pleasing high rollers, who know they benefit from their willingness to spend more, and casual players, who can still hit the jackpot from a small bet, albeit at diminished odds. It’s worth noting at the biggest win ever came from a 0.25 spin. The RTP rate varies between 85% and 94% depending on your stake amount but the variance is actually quite low thanks to the frequency of those wild wins. You usually win something every 4 or 5 spins, even if it’s not the prize you’re really after.

OUR VERDICT ON MEGA MOOLAH

Mega Moolah’s track record speaks for itself. It is responsible for the single biggest online casino win of all time (a cool £13 million) as well as dozens of other 7 figure wins. The numbers at stake here truly mind-boggling, and let’s not forget that the mega jackpot never drops below £1 million guarantees the winner a 7-figure sum. The jackpot grows ridiculously quickly thanks to the popularity of the game and it dished out 6 different wins of £5,000,000 plus in 2016 alone. It has the biggest following, the biggest reputation, and the biggest prizes. It’s just the Big Daddy of jackpot slots.

Play Mega Moolah at one of these casinos