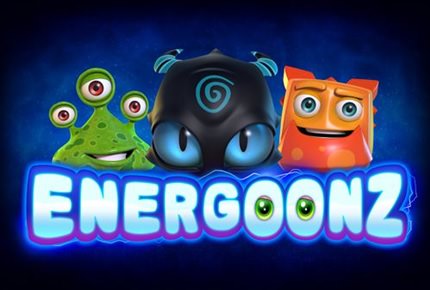 The best casinos to play EnerGoonz

Firstly, a confession. We all love EnerGoonz here at 777 Casino. It’s right up our street, our cup of coffee, a big favourite or whatever cliché you want to use to describe it. Considering we can barely agree on the colour of the sky much of the time, it’s quite remarkable that we all love it so much. But other than its ability to unite our office, what is it about this slot that makes it so damn moreish? Well, there’s plenty and we predict that most of you will like it from your very first spin. Let us explain why.

EnerGoonz doesn’t boast a storyline as such. Neither does it incorporate lots of natty animated videos to supplement the action or a grand introduction. The joys of this slot are much simpler than that. It’s a creative game packed with charismatic, colorful characters and deceptively simple gameplay. The symbols are much more interesting than the traditional ‘blocks’. Three of them feature oddball monsters (or ‘goons’ we supposed), all of which come to life on the reels. They blink, they shuffle, they nod and they grin at you. It’s all so damn cheery.

If you were seeking the inspiration behind EnerGoonz, you could cast your eye towards the likes of Monsters Inc. Indeed, there’s something very Pixar about the look of this slot. The graphics are sharp and the colours are bright. The layout of the reels in relation to other elements of the game smacks of intelligent design too. Even though you never really leave the main game during the course of the game (even casino free spins are played on an identical grid), EnerGoonz is never anything other than engaging. It’s a remarkable feat and testament to the creativity of the Play N’ Go team.

If you’ve ever played Troll Hunters, you’ll be familiar with the EnerGoonz bonus features. They are near enough identical yet seem more fun when you’re playing Energoonz, which is a testament to the likeability of this slot. This game isn’t packed with lots of complex bonus rounds or intricate extras. It does, however, use 2 or 3 clever features in tandem to enormously good effect. Let’s run through them one by one.

It’s not a feature in the truest sense of the word but it’s integral to the game. Play N’ Go have foregone complicated matrixes of paylines in favour of a simpler approach. Match three or more identical symbols in an adjacent line horizontally or vertically and you win. Symbols can form more than one winning line and you bank the bucks for every winning combination generated from a single spin.

A single win can quickly begin a chain reaction leading you to multiple payouts and a fistful of cash when you play EnerGoonz. That’s because the middle symbol of ever winning combination (or one of the middle symbols in a four combo win) turns wild. Other winning symbols disappear so surrounding symbols shift into their place, often buddying up with your wild to create another win before the process is repeated. If you get three wins from a single spin, three wilds are generating. It’s easy to see how you get on a run. And there’s more…

You not only benefit from a wild when you create a winning combo, but you also get a multiplier too. The multipliers increase by x1 with each consecutive win and they are applied to all winning lines. In other words, if you create three winning lines in a single spin, all three are multiplied. All your winning combos and the progress of your multipliers are recorded in a handy pane to the left of the royals so you know exactly where you’re at. It’s a great feature and cleverly incorporated. As wins pop up often, you can expect to make productive use of the multipliers.

When you press to spin, you briefly catch sight of the word ‘Bonus’ written beneath the EnerGoonz reels. Should you managed to reveal the entire world by clearing the reels (symbols disappear without being replaced when they create a winning line), then you enter into a free spins round. You are providing an entirely new bunch of symbols featuring some snoozing aliens of a higher value than their main game counterparts. During free spins, you just need five matching symbols to appear on the reels in any positions to create a win. In truth, it’s not the most lucrative free spins bonus we’ve ever seen on it. That said, you can pick up a series of decently sized wins that, in combination, the cash you earn in the main game, can leave you sitting on a pretty packet

WHAT ARE YOUR CHANCES OF WINNING ON ENERGOONZ?

EnerGoonz is a low variance slot. You rarely go more than five or six spins without picking up a win from our experience so you’ll keep your bank balance ticking over. We also found that the wilds and multipliers can turn a decent proportion of your wins into something much greater. You might not pocket a small fortune but we hit a couple of x30 or x40 wins thanks to a series of combinations. It’s the lack of a jackpot generating, headline feature that might out the high rollers off. We just love playing this game, and the fact that the wins come in regular spurts seems to fit them perfectly. You have a good chance of ending your EnerGoonz session in the black on the majority of occurs.

When we’re looking for a quick and casual session on the slots, we often find ourselves punching the word ‘EnerGoonz’ into the slot search box. This engaging slot has established itself in our favourites box through the simplest of means. There are the ‘living’ symbols that have been injected with bags of personality. Then there are the three bonus features, which interconnect perfectly to help you create some juicy wins. Finally, there’s some intelligent design touches and that most important of factors, intense playability. All that in combination makes EnerGoonz the darling of the Play N’ Go catalogue and one of our favourite online slots from any provider.