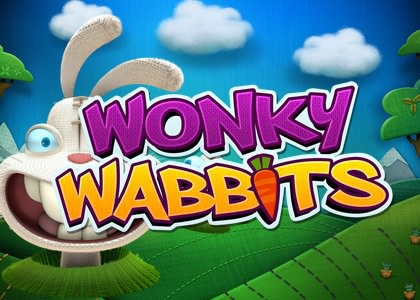 NetEnt’s Wonky Wabbits is a 5×3 reel slot that gives you the chance to act like a massive, overgrown kid. Its childish name perfectly reflects the game, which is full of retro cartoon graphics and zany-boggle-eyed rabbits. It’s enough to have you blowing raspberries and asking people to pull your finger. None of this is intended to denigrate the slot. It’s great fun to play and perfect for some light escapism from the challenges of everyday life. Wonky Wabbits is not your typical NetEnt slot in more ways than one. Here’s why.

WHAT IS THE WONKY WABBITS ABOUT?

You can see the logic behind certain slot game themes. Pop-culture games like the Playtech Marvel series, MicroGaming’s The Dark Knight and NetEnt’s Aliens have obvious appeal. Cultural subject matter such as ancient Chinese History (Huangi: The Chinese Emperor) or Norse Mythology (Thunderstruck) also provide plenty of sense. Wonky Wabbits defies all that because it doesn’t really have a theme at all, other than minor madness. The brainstorming session that led to its creation must have been an interesting one.

Ultimately, that session led to a cartoon patch full of ‘five-a-day’ symbols.. They’ve then introduced some rather bizarre looking rabbits, who look like the bunnies Myxomatosis forgot to exterminate. The rabbits only pop up when you need them, chomping the vegetables and other symbols to create extra wilds to fulfil the game’s one major feature. It’s this feature that provides the bulk of the gameplay, and it’s a little bit different from your average free spins round or pick and click game.

Indeed, you never leave the main game when you play Wonky Wabbits. There are no scatters, bonus rounds tumbling reels here. You just keep spinning the wheels in search of multiplying wilds, that will appear frequently to help you form bigger wins. We can’t help thinking that NetEnt missed a bit of a trick here. They’ve created some interesting cartoon characters who could have been incorporated into a cool little bonus game. It wouldn’t be so bad if the main game had enough about it to keep you engaged, but we’re not sure it does.

When you’re not smirking at the antics of the Wonky Wabbits themselves, you’ll spend most of your time crossing your fingers, legs and toes in the hope that you receive a wild or two with each spin. The wilds in Wonky Wabbits duplicate adjacent symbols to form winning lines – just as they do everywhere else. However, whereas they are used to keep the main game interesting while you try and trigger other features, here they sit at the heart of the entire game. For that reason, NetEnt have given the Wonky Wabbits wilds some additional attributes.

When a wild appear on the reels after a spin, it’s automatically duplicated to another position on the reels. The additional wild automatically replaces the symbol that will help it form the biggest win possible. A wonky wabbit then appears to gobble up the old symbol and act as the new wild. The number of additional wilds you receive depends on the number of wilds you landed from your first spin. If you get two wilds, you get two more via the Wabbits. If you land three from your spin, you get three more. In addition to that, the wilds can be stacked on reels 2 and 4, meaning you could theoretically create 14 wilds from one spin. You can expect a huge payout if that happens.

WHAT ARE YOUR CHANCES OF WINNING ON WONKY WABBITS?

There’s a problem here, though. The chances of you landing 14 wilds are so slim-to-anorexic. There’s no evidence it has happened before and we’ve never landed more than one stacked wild either. Now, you can score big wins when the stacked wilds pop up but we’ll issue a word of warning. Wonky Wabbits can hoover up your money in the meantime. Because the wilds as so valuable, they don’t appear as often as you might expect in other games. And that creates a couple of issues.

Firstly, it means that you spend most of your time just spinning and spinning in the main game, while only standard symbols appear. As good as the game looks, it soon becomes boring. Secondly, there are only 15 paylines so you don’t score many standard wins, and those that do come along are tiny. Don’t get us wrong, when the wilds start appearing, your adrenaline levels will rise and so will your bank balance. They just don’t appear often enough to make this game as lucrative as others in the NetEnt collection. We recommend that you play it with some free spins first, and luckily we know an online casino where you can do just that….

OUR VERDICT ON WONKY WABBITS

Yep, Wonky Wabbits is no Starburst. It doesn’t figure in free spins offers too often. However, Spinson’s welcome package provides up to 999 free spins depending on the size of your initial deposit, and they let you use your freebies on five games including Wonky Wabbits. We recommend that you give the game a whirl with free spins first. It will allow you to make your own mind up about the payout potential of this online slot before you commit your cash. We know some people who love it, but we’ve found it to be something of a cash burner. Perhaps our luck simply wasn’t in when we played, you might fare better.

Play Now
Play Now
Welcome Offer Is For New Customers Only. The Minimum First Deposit Required Is £5, For All Subsequent Deposits The Minimum Deposit Is £10. The 100 Chances Are Credited As A £25 Bonus And Players Can Wager 100 Times At £0.25 On The Mega Moolah Slot Machines. A Two Hundred Times Wagering Requirement Applies On All Bonuses And Certain Games Contribute A Different Percentage To The Wagering Requirement. See Full Terms And Conditions Here. See more
Yako Casino
On Registration