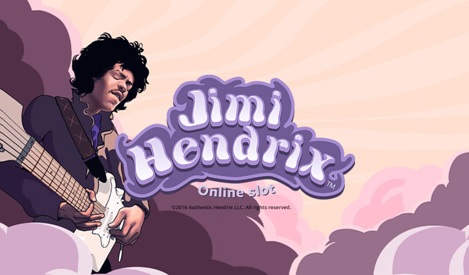 Any online slot that celebrates the rare, mercurial talent of the late Jimi Hendrix has one hell of a job on its hands. If you were going to pick a provider to do the job, then NetEnt would always have ranked highly on the list. It’s clear that they took the job seriously. Indeed, all three of their Rock Slots trilogy are packed full of the features that scream ‘labour of love’. Jimi Hendrix died half a century ago but this slot introduces his music to a whole new audience. And you’ve got to admit, it’s particularly satisfying when the screaming, psych guitar of Foxy Lady heralds a win.

WHAT IS THE JIMI HENDRIX SLOT ABOUT?

Load up the slot and you’re immediately greeted by the unmistakable, stuttering riff of Voodoo Child. The video intro features an animated image of Hendrix knocking out some of his best-known songs with accompanying pyrotechnics. A 1960s guitar God and a 21st-century video slot don’t strike us as the most obvious or natural bedfellows. But a few spins to the strains of Purple Haze and you’ll wonder why nobody thought of this sooner. The music is electrifying, and so is the online slot’s gameplay – especially with so many bonus features to keep it interesting.

Of course, there are dangers to introducing a music-themed slot. If you don’t like the music, you won’t like the game (and you should be booed out of town, but anyway). Even if you are a fan, you’re going to hear these tunes a lot. It really does augment the action though in this slot. It’s a fast-paced game set to an exhilarating soundtrack. The symbols reflect both the era and some iconic moments in the main man himself with psychedelic flowers, eyes and, of course, guitars. Oh, and we should mention the colour scheme. It’s very, very purple (and not at all hazy). Pop your shades on.

As we mentioned at the beginning of this review, the NetEnt team seemed to pour extra special effort into the creation of their rock trilogy of online slots. Now, if we were being cynical, we might suggest that the additional blood, sweat, and tears reflect the amount of cash they’ll have forked out to license the image and music. We’re not cynical types, though. So, let’s stick with the labour of love line. They’ve beautifully incorporated the music into the main game, but their efforts are most clearly encapsulated by the gameplay. They’ve included a lofty stack of bonus features that’s as high as most of London was during the summer of love. Let’s try and get through them all.

We can start with a nice easy one – the Jimi Hendrix wilds. They’re a simple image of his face and substitute for all other symbols to create winnings lines. They pop up frequently during the main game, and play an extra role in a few of the bonus features, including…

If the purple Jimi Hendrix wild appears on reel 1, he jumps in to life, knocks out a tune and turns the least valuable symbols – 10, J, Q and K – into wilds as well. This is the most frequently occurring feature in our experience and will help you keep your bank balance ticking over.

Another feature of the main that can help you accumulate some medium sized wins, a respin is triggered when four red guitar symbols appear anywhere on the reels. The red guitars stay in place for the duration of the respin and as it’s the game’s highest paying symbol, it can trigger a decent sized win.

An image of Jimi wearing white with a bunch of celebratory arms forming angelic wings ushers in the pick and click game, triggered by three scatter symbols across reels 3, 4 and 5. You are presented with a room full of amps and speakers. Start clicking on the images until you reveal three matching symbols. When you find a trio, you receive the associated bonus. Here’s the full four:

WHAT ARE YOUR CHANCES OF WINNING ON THE JIMI HENDRIX?

So, three different free spins games, coin wins with multipliers, respins and magic wilds. That’s a whole lot of bonus and a whole lot of opportunities for medium to big sized wins. We consider Jimi Hendrix to be a medium volatility slot, with lots of regular wins in the main game boosted by the appearance of the red guitar respins and especially the purple haze feature, which turn small wins into mid-sized coin drops. The scatters are no strangers to the reels and when you enter the different free spins rounds, you can clock up some massive hits of your own. There’s a wide range of possible stakes (between 0.20 and £200 per spin), as is typical of a NetEnt game. It has an RTP rate of 96.9%.

OUR VERDICT ON JIMI HENDRIX

I’m the resident Jimi Hendrix fan at 777 Casino HQ, and it obviously increases your enjoyment of the game if you like his music. However, just like Guns N’ Roses, NetEnt has created a fantastic slot in its own right thanks to a slew of fantastic bonus features, which appear regularly enough to keep you on the edge of your seat. In the final reckoning, the Jimi Hendrix soundtrack compliments the game rather than vice versa, which is the way it should be. We’ve scored some very decent wins while playing this excellent online slot, and we highly recommended it.