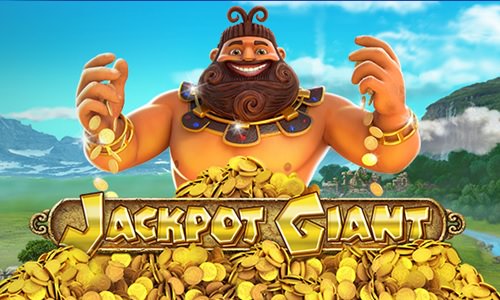 First things first. Jackpot Giant looks beautiful. From the introductory video featuring the eponymous giant trampling over trees with a big grin over his bearded face to the crisp, bright in-game animations, this is a super-stylish slot. We think its visuals put other famous progressive jackpot slots like Mega Moolah and Mega Fortune into the shade but looks aren’t everything. Does Playtech’s most prominent foray into the progressive jackpot market come up trumps in other areas?

WHAT IS THE JACKPOT GIANT JACKPOT SLOT ABOUT?

Jackpot Giant is set in a mystical, verdant land dotted with boulders and smoking volcanoes. The friendly Jackpot Giant calls this place home and he’s a cheery sort of half-naked ogre, with his permanently goofy grin and increasingly fashionable hipster beard. This giant is definitely more Hagrid than Goliath. The painted symbols reflect the theme, with Ace to Jack symbols carved out of crumbling stone and stacks featuring the giant lording it over his land. A splendid bonus game extends the theme further. But more on that later.

Progressive jackpots tend to let their millionaire-making potential do most of the selling for them so it’s great to see one with such an obviously fun theme. By incorporating a couple of innovative bonus features, the Playtech team have ensured that Jackpot Giant is a great slot regardless of the big bucks on offer. But let’s face it, many of us play jackpot slots for one reason – to chase the dream. The top prize available at Jackpot Giant has improved considerably over the years and rarely dips below that magical 7-figure mark. Be warned though – the hit rate is much lower than some of its rivals and it can go a year without popping. That’s probably because you need five wilds on the first payline to trigger it (there are 50 paylines in total). Plus, you only qualify for the jackpot if you stake the highest amount possible (£4) per spin. It’s not one for the faint-hearted.

There’s no attempt to hide the fact that you need to stake high to qualify for the bonus at Jackpot Giant. A huge ‘not active’ banner sits above the reels if you’re not playing for the progressive (it’s replaced by the running jackpot amount at other times). It also ensures that many players enjoy Jackpot Giant for its standard main game features. Amongst them is an enjoyable little bonus game, which sees volcanoes spew coins rather than your bog standard, boring lava. Let’s start with the wilds though.

Wilds pop up regularly in Jackpot Giant and substitute for other symbols to creating paying lines. Look out for the gold symbol, it handily as the word ‘Wild’ carved into it so you can’t really miss it. Wilds can substitute for anything other than the scatter or bonus symbol.

Scatters don’t trigger any bonus features in Jackpot Giant, but they do pay out. Land three or more symbols anywhere on the reels to pocket the cash. The scatter symbols come in the form of a giant hand full of coins.

Ok, so it’s essentially just a pick and click game. But it’s just so damn pretty! Bonus symbols on reels 1 and 5 activate the round. You’ll pick three of six volcanoes and the Jackpot Giant will chuck some a coin into each one, causing them to erupt in a shower of coins or, occasionally, another free pick. You can easily walk away with a hefty loot and it’s an engaging little game too. Play Jackpot Giant enough and you can expect to see it quite often.

HOW DOES THE JACKPOT GIANT JACKPOT BONUS GAME WORK?

It’s important to reiterate those key points about the Jackpot Giant progressive jackpot. Firstly, it’s potentially huge and last dropped for well over £4 million (at the time of writing). Secondly, as a caveat to that, it drops rarely. Again, we’ve been waiting for it to pop at for over a year at the time of writing.

Thirdly, you need an improbably five straight wilds on one specific payline to activate the jackpot game, which might explain how infrequently it falls. And fourthly, you have to stake the maximum amount of £4/€4 (0.08 minimum bet across 50 paylines) to activate the bonus. If the text in the scroll at the top of the game says ‘Not Active’ then you ain’t playing for the bonus.

In sum, if you’re a casual player chasing a dream, you’ll probably be more inclined towards NetEnt jackpots like Mega Fortune, where your chances of winning the big prize are unaffected by the amount your stake on each spin. You need some nerve to bet £4/€4 a go in pursuit of the big prize but the rewards are potentially huge of course. You’ll just have to work hard for the privilege.

WHAT ARE YOUR CHANCES OF WINNING ON JACKPOT GIANT?

We don’t recommend that you hang your hat on a jackpot win. But that doesn’t mean that you can’t win a decent amount on Jackpot Giant. With 50 paylines and bonus features that land often enough to keep you both interested and well topped up, we’d say this is a medium variance slot. The bonus game can be very lucrative if the volcanoes erupt in your favour and you’re pretty much guaranteed to leave with x10 winnings when you trigger it. We recommend you play this slot primarily for the main game features because it’s immensely good fun. However, if you’ve got the cash spare to shoot for the progressive jackpot, then all the better.

OUR VERDICT ON JACKPOT GIANT

Jackpot Giant is such a fun slot to play. It doesn’t have a huge number of features but it makes the most of what of those that are there. Amongst the scores of jackpot slots on the market, this boasts some of the very best gameplay – we simply love the bonus game and it can be a nice little earner to boot. Playtech have done a great job.

It’s all needed because the progressive jackpot itself is particularly hard to win. We’d never expect it to be easy otherwise we’d all be drowning in cash, but with some tricky qualification criteria, it’s no surprise it hasn’t dropped for 410 days. It will blow at some point that said. If you can spare £/€4 a spin, it’s got to be worth a whirl.