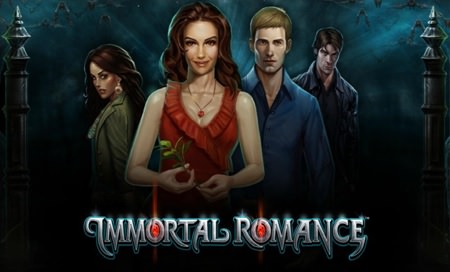 Immortal Romance has transcended its original status as a cult classic to become one of the most popular online slots MicroGaming ever released. Just like the Twilight films, it places charismatic young characters in a dark, Gothic world full of mystery and intrigue. It has all the hallmarks of a niche game, loved by plenty but ignored by many others. However, an expertly woven back story combined with absorbing in-game features has elevated it to the top of the online casino tree. It’s like Thunderstruck II has been reinterpreted with a new storyline.

WHAT IS IMMORTAL ROMANCE ABOUT?

The comparisons with Thunderstruck II focus on the gameplay rather than the theme. Indeed, the two games could barely be more visually distinct. There’s something uniquely engaging about the moody ambience of Immortal Romance and it’s perfect for a late-night slot session. Twilight is a clear modern reference point, but it also harks back to 90s fantasy franchises such as Buffy and Interview With the Vampire. It’s a genre has plenty of mileage, and MicroGaming have taken it and ran. Even the mobile version of the game for Android and iPhone/iPad is beautifully recreated.

The game opens sedately with the atmospheric piano-led music, which features throughout the main game but makes way for a vocal led tock song during the free spins feature. The game’s visual design honours its theme, with gargoyles overlooking proceedings, a dark colour scheme punctuated sprinkles of glowing light and animated symbols featuring the main characters of the game. You unlock those character’s histories through a series of videos as you play the game. It’s clear that Immortal Romance has been developed with meticulous planning and a rare thirst for detail.

The startling visuals only tell half the story. We can be sure that the theme won’t appeal to absolutely everyone. I mean, if you hate Robert Patterson, for example, it might make you want to vomit a hip up. That might be a little strong, but it’s a great credit to the designers that a potentially niche slot has become so universally popular. It helps that it’s well designed, but we bet the features are the truly defining factors here. They follow a similar structure to those found in Thunderstruck II, and that can only mean a winning formula.

Yep, this old MicroGaming feature is back in Immortal Romance. Any combination of three or more matching symbols means a win. There’s no scratching around for a limited number of payline patterns. It’s not a feature in the traditional sense, but it’s bloody appealing to everybody.

Extending the romance theme further is the Wild Desire feature, which can randomly raid the reels at any time during the main game. It will turn a whole reel (or multiple reels) into a giant stack of wilds, which mimic adjacent singles to make winning lines.

A little more conventional but also more likely to appear that any random feature, the game’s Substituting Wilds appear in the form of ‘Immortal Romance’ symbols chiselled from grey stone. They do exactly as you’d expect, kindly substituting for other symbols to turn unsuccessful spins into big wins.

SCATTER SYMBOLS AND THE CHAMBER OF SPINS

There Lion door knocker scatters symbols (try saying that after a drink) propels you fang-first into the Chamber of Spins. All four of Immortal Romance’s main characters have their own free spins game, beginning with Amber and proceeding through Troy, Michael, and Sarah. You unlock more animated stories as you join them in the chamber and discover their history, both as humans and members of the undead. This is more than just a slot, it’s an adventure game with a tale to tell.

WHAT ARE YOUR CHANCES OF WINNING ON IMMORTAL ROMANCE?

We’d say your chances are good. We can only speak from experience and tell you that we have bagged some of our biggest wins this month playing Immortal Romance. It’s a medium variance slot that pays well. Or the perfect combination, in other words. The 243 win ways certainly help, as does the liberal inclusion of wilds. But we find that the Chamber of Spins isn’t as elusive as you might expect and you will usually enter it during a session of decent length, if not sooner. You’ve got a huge chance of winning substantial cash during the free spins round and you have the satisfaction of unravelling the supernatural story of Immortal Romance too. Hit a multiplier and you could find yourself pocketing x40 or x50 your stake more than once.

OUR VERDICT ON IMMORTAL ROMANCE

There aren’t any games better than this one. It’s a bona fide classic with a story that’s as sophisticated as it is engrossing, and a bunch of features that rival the best MicroGaming can offer. Eagle-eyed fans will notice the similarity in structure between the Chamber of Spins and Thunderstruck II’s Great Hall of Free Spins. It’s the sort of bonus round you want to see rehashed though, especially when it’s been reimagined in the dark, mysterious world of fantasy you find here. Immortal Romance is an impeccable video slot that’s worthy of its anointed status among online casino regulars.