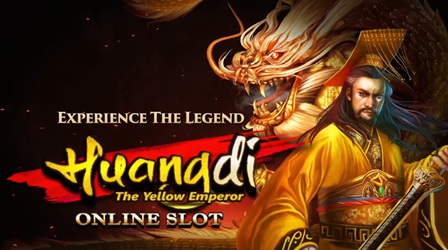 Play Now
Valid for new players only without an expiration date. The Welcome Bonus can only be claimed only once. The first Welcome Bonus is a 100% Bonus up to £100 and 50 Bonus Spins. To claim the Bonus you need to make a min deposit of £20 See more

Our knowledge of Ancient Chinese History is regrettably dodgy here at 777 Casino. We hear there’s a fairly large wall over there and an army made out of plant pots. It really doesn’t extend much further than that. MicroGaming’s latest slot aims to enrich our brains by introducing us to Huangi The Yellow Emperor, a man credited with being the father of Chinese civilisation and a relative of all 2 billion of its current native residents. It’s fair to say Huangdi was an important chap but does the slot do his reputation justice?

WHAT IS HUANGDI: THE YELLOW EMPEROR ABOUT?

We’re not stupid, we can use Wikipedia as well as the next man. It doesn’t take long to learn a little more about the Huangdi himself and appreciate his importance to China as a nation. Many achievements have been ascribed to The Yellow Emperor, who is revered for his intelligence, resourcefulness, and benevolence. But for all that, he was a fierce warrior as well. The slot celebrates his prowess on the battlefield, with particular reference to his famous defeat of the Nine-Li tribe. It’s a compelling story and a little different from the usual online casino game themes.

An atmospheric soundtrack, featuring dramatic music interspersed with traditional Chinese sounds, supports the game’s theme. It’s less relaxing than NetEnt’s soporific oriental slot Lights, but Huangdi: The Yellow Emperor does retain a certain ambience. In truth, we’re disappointed that MicroGaming didn’t explore the game’s subject matter a little further and incorporate elements of the story into the bonus features. That seems like something of a waste. Nevertheless, this is a pretty slot with carefully animated symbols. Look out for Huangdi himself, his stacked symbols are the highest value by some distance. You’ll need him if you want to create some big wins.

MicroGaming have incorporated two or three solid bonus features into Huangdi: The Yellow Emperor. The Expanding Stacked Symbols are likely to garner the most attention and they are certainly an interesting addition that can help you rack up some coin drops across the slot’s 25 paylines. There’s a casino free spins round as well but it can be hard to hit. Let’s look at the bonus features in a smidgen more detail.

Stacked wilds can appear on the first reel during any spin and they can buddy up with adjacent symbols to create wins. More interestingly, if the stacked symbols appear anywhere else on the reels in a winning combination, that symbol will also expand to fill an entire reel, creating several stacks and plenty of potential.

It’s an exciting feature but can be a tad frustrating. Your heart will skip a beat when the spin settles to reveal a full stack but all too often it doesn’t translate into expanding wilds elsewhere. If you do get three or four stacks, you could win a decent amount, especially if the Yellow Emperor symbol is involved. We’ve won x25 and x35 our stake a couple of times with lower paying symbols, however. Obviously, it’s possible to fill every reel with the same symbol, at which point you would probably wet yourself.

The game’s logo acts as a wild in Huangdi: The Yellow Emperor. There’s nothing out of the ordinary about the symbol’s behaviour, it simply slots in alongside other symbols, mimicking them to create winning lines. The wilds appear with decent regularity and help you keep your bank balance ticking over.

Get 2 or more golden scatter symbols anywhere on the reels, and Huangdi: The Yellow Emperor will pay out. Get 3 or more and you will enter into the free spins round. There are a couple of reasons why we love this free spins round. Firstly, the stacked symbol feature has been jettisoned into the bonus round. The symbols on reel 1 are stacked and again cause matching, winning symbols to expand and create bigger wins. Secondly, you get a whopping, great 15 free spins to begin with, and can win more if you find more scatters.

The only downside? Well, the free spins round doesn’t appear too often. It might seem obvious, but as there isn’t a huge amount of variation in the main game, you end up feeling like your waiting for death before you snag yourself a shot at the really big money. Make no mistake, the free spins round is where you’re most likely to win the big bucks on Huangdi: The Yellow Emperor.

WHAT ARE YOUR CHANCES OF WINNING ON HUANGDI: THE YELLOW EMPEROR?

We’d place Huangdi: The Yellow Emperor towards the high end of medium variance. We found that we hit sporadic, mostly small wins during the main game interspersed with the odd chunky coin drop when the expanded wilds fell favourably. The real value lies in the free spins round, where the expanded wilds and potential for further free spins can quickly turn your fortune. However, you’ll have to exercise plenty of patience and a dash of never while you wait for free spins. The game has a theoretical RTP rate of 96.4% and you can stake between 0.25 and 125.00 on a single spin.

OUR VERDICT ON HUANGDI: THE YELLOW EMPEROR

Huangdi: The Yellow Emperor boasts an unusual, intriguing theme and an attractive interface, the like of which you would expect from those seasoned pros at MicroGaming. It might have built on the premise of the story a little more and incorporated it into the bonus features, but that’s nit-picking. The features are interesting but not always as lucrative as you might hope, particularly the Expanded Wilds in the main game. Nevertheless, you’re likely to see some good sized wins if you manage to turn three reels into stacks. You can also lay in wait for the onset of an excellent if rare, free spins round that could earn you a fortune. It doesn’t rival the very best MicroGaming have to offer but it’s still an enjoyable enough slot for a late night session.

Play Now
Play Now
Valid for new players only without an expiration date. The Welcome Bonus can only be claimed only once. The first Welcome Bonus is a 100% Bonus up to £100 and 50 Bonus Spins. To claim the Bonus you need to make a min deposit of £20 See more