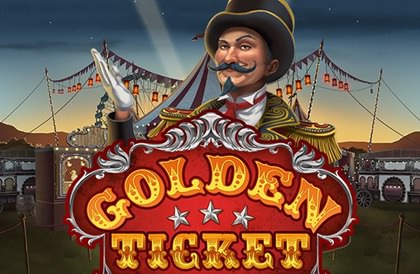 Play N’ Go isn’t your average game provider. They are one of our favourites because they do things their own way, infusing their online slots with innovative gameplay concepts that are unmistakably theirs. Games like Gemix redefined the boundaries of video slot games, and while Golden Ticket is a little less ambitious than that, it still provides a different type of gambling experience. It boasts a charming design and some signature features that we’ve seen in other Play N’ Go games. They only ever recycle their best ideas – and Golden Ticket’s key features are among them.

WHAT IS THE GOLDEN TICKET SLOT ABOUT?

Golden Ticket celebrates circuses of a bygone age – ringmasters, strong men, clowns and the alike. As is usually the case, the Play N’ Go design team has done a terrific job with the visuals. The 5×5 looks crisp and uncluttered, leaving room for the master of ceremonies to oversee proceedings with his spectacular moustache. It’s a thoughtfully animated theme that works ever so well. And that comes from me – someone who was terrified of clowns as a kid and thus screamed a circus down the only time I ever went. I still want to know what clowns keep in their big shoes (it could be heavy weaponry).

Leaving clown based cynicism aside, Golden Ticket is genuinely one of Play N’ Go’s best looking online slots. If you land the free spins feature, you get a completely different games grid, which takes the form of a ‘shooting gallery’. When winning combinations appear, bullet holes appear in them before a new grid is formed. Of course, it’s all set to an old-fashioned circus style soundtrack as well. We were surprised just how immersive and engaging this game could be. It just shows how a thoughtful, well-rendered theme can win you over.

Golden Ticket is hosted on a 5×5 reel structure. There are no paylines as such, with wins formed by three identical symbols either vertically or horizontally. Each win turns the middle symbol in the successful combination and triggers a cascade, with new wins forming around the wild. Each win earns you an increased multiplier and as the symbols disappear, they reveal the word BONUS behind them, letter by letter. If you manage to uncover the entire world, you activate the free spins round. That’s the features in a nutshell, but does this all sound a bit familiar? Don’t worry, you’re not going mad. The same concept drives other Play N’ Go games like Energoonz and Troll Hunters. As we said at the start, they like to recycle their best ideas.

Plus, the concepts that govern the action are very innovative, yet simple. You make a win and watch the middle symbol turn into a Golden Ticket. The other symbols in the winning line then explode so others fall down to take their spots, regularly making new wins in combination with the wild. If you manage to wins in different places on the grid, you get two wilds. Unlike other games which use ‘Cascading Reels’, the exploded symbols are not replaced by new ones. This means the grid gradually becomes barer, which is crucial to your chances of activating free spins.

Yep, games studios have come up with various ways of triggering free spins rounds over the years. None are quite as the process Play N’ Go use in Golden Ticket (as well as Energoonz and Troll Hunters). Because the grid gradually becomes sparser the more times you win, they’ve buried the word ‘Bonus’ behind the symbols. As you clear the reels, you reveal the word (or words – sometimes Bonus is written more than once). Spell out ‘Bonus’ in its entirety and proceed into the Golden Ticket free spins round.  You get up to 15 bonus spins with the brand new ‘Shooting Gallery’ interface. You just need five matching symbols for a win so can expect several. You can quickly clock up some big wins, sometimes hundreds of times your bet.

Your chances of winning big are greatly increased by Golden Ticket’s other big feature. Every win not only creates a wild but it adds a multiplier too. A run of consecutive wins can quickly escalate into a hefty payout thanks to this feature, and you can check your progress in the special pane to the left of the reels. By the time you have a x7 or x8 multiplier, then your game can get very interesting. When a run of wins is interrupted, your multiplier is reset until you next form a winning line.

WHAT ARE YOUR CHANCES OF WINNING ON THE GOLDEN TICKET SLOT?

We’ve touched upon this above, but basically, your chances are good. Given that every win creates both a wild and a multiplier in both the main game and casino free spins, it’s easy to keep your bank balance ticking along. Sure, you’ll need a decent size multiplier to rack up a big win but those cascading reels are bound to help. This is a relatively low volatility game so expect regular small wins, yet the prospect of a juicier windfall from the free spins round looms large as well. Golden Ticket has an RTP rate of 96.73% and can be played between 0.10 and £40 per spin.

OUR VERDICT ON THE GOLDEN TICKET SLOT

Play N’ Go have recycled some concepts used elsewhere to great effect with Golden Ticket. This is a design house that has developed a reputation for quality over quantity as well as innovative gameplay. Both those qualities inform this excellent online slot, that looks great, sounds wonderful and plays beautifully. The bonus features all interconnect with one another, which provides a nice dollop of continuity as well as the prospect of a big win or two. We don’t have a bad word to say about this slot and are left with one conclusion. Play N’ Go have produced another classic in Golden Ticket. Bravo, lads, and lasses.

Play Now
Play Now
18+. New players only. One bonus offer per player. Minimum deposit of £20, Max bonus bet £5 Bonus offer must be used within 30 days and bonus spins within 10 days, otherwise any unused shall be removed. Bonus spins are valid on the following games only: Jungle Spirit, Starburst, Hotline and Fruit Spin. Bonus funds are 100% of your first deposit up to £100, 50% of your second deposit up to £250, 50% of your third deposit up to £150 Bonus funds are separate to Cash funds, and are subject to 35 x wagering the total of bonus, cash & bonus spins. Terms Apply. BeGambleAware.org. See more
Mr. Play Casino
On Registration