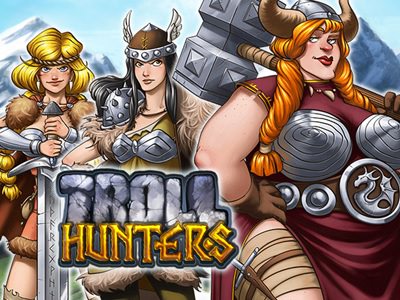 Play N’ Go’s Troll Hunters is a colourful online slot that invites you to chilly Scandinavia. You’ll join a scantily glad Nordic warrior (whose Dad clearly forgot to tell her to wrap up warm for winter) as she scours the harsh landscape in search of the tiny, fluorescent-haired monsters that you used to keep on the end of your pencil at school. Ok, so there’s a chance it’s not that type of troll their after but don’t let that stop you. This game has a lot going for it.

WHAT IS THE TROLL HUNTERS SLOT ABOUT?

In truth, the theme is only loosely applied. The eponymous trolls are conspicuous by their absence in the main game but then we guess they’re a secretive sort of beast. You do get to see the ugly mush of one during the cute cartoon intro but there isn’t much in the way of video interaction thereafter. That’s not to say this slot doesn’t look great.

It’s a chunky 5×5 reel set against a chilly Alpine backdrop. It boasts a clever interface with tumbling reels and a handy pane, which fills up with multipliers when you activate the game’s key feature. The attractive painted symbols are appropriate to the game’s theme. You’ll see some fearsome, female Viking warriors, joints of juicy meat and skullcaps brimming with booze. What else could you need when setting off on a troll hunt? Other than some trolls, perhaps.

Troll Hunters may lack the sheer breadth of features that some of MicroGaming or NetEnt incorporate into their biggest games, but it makes the most of what it has. The extras are also highly accessible so you’ll pick up the gist of the game within a few spins (or a few wins). In combination, the three main features pack enough punch to please most punters and we particularly like the first of them.

Sometimes, it’s the simple ideas that work best. There aren’t too many slots that offer wins when you match symbols both horizontally and vertically – but Troll Hunters is one of them. Given that this is also a 5×5 slot, you have plenty of chances to create winning lines. You’ll find that the coins drop with regularity. And there’s more to come.

Every time you win, all the successful symbols disappear except for the one that sits in the centre of the combination. That one instead turns into a golden rune wild symbol. As the surrounding symbols drop again, the wild can help you create another win. Best of all, if you land multiple winning lines, the central symbol of each will turn wild. If those winning combos are close together, they can link up to create even bigger winning patterns.

Not only do those wilds help you get on a run of consecutive wins, but they also pair up with the game’s 2nd feature to provider greater rewards. Every time you score a win, you also pick up a multiplier. You start with a x1 boost but every consecutive win in a run increase the multiplier by x1. If the symbols continue you to drop in your favour, this feature can quickly swell your coffers. As soon as your run ends, the multipliers disappear from the pane to the left of the symbols while you hunt your next win.

This is definitely a game that reward multiple wins and the last feature solidifies that impression. Consecutive wins will spell out the word BONUS letter by letter. When you’ve revealed the entire word, you enter the casino free spins round. If five matching symbols appear anywhere on the reels, you earn a win when you’re playing your bonus spins (it doesn’t matter whether they are adjacent to one another or not). The wins tend to be modest but the simplicity of the gameplay is strangely mesmerising.

WHAT ARE YOUR CHANCES OF WINNING ON TROLL HUNTERS?

You have a 5×5 reel slot, a ‘wins create wilds’ feature and vertical winning lines for adjacent symbols. With all that combined, you’re unlikely to go more than a handful of spins without a win. This is a readily accessible game and we’d rank it towards the low end of the variance scale. We found that most of our small wins did usually lead to another win and at least one increased multiplier in the main game. Those incremental increases kept our balance ticking over while we waited for the free spins round, which is a much rarer occurrence. When it does arrive, it’s likely to herald several decent sized wins rather than one or two chunky payouts. So, Troll Hunters probably isn’t the best choice of game for budding high rollers.  But it’s frequent wins and interesting interface will appeal to the majority of gamers.

OUR VERDICT ON TROLL HUNTERS

Troll Hunters is one of the best games in the Play N’ Go catalogue. Unapologetically aimed at the mass market, it combines an unusual theme, attractive design and some ingeniously simple bonus features to great effect. We love the way that wilds and multipliers combine to help one win become two and two wins become three. You might not pocket enough cash to retire while playing this game but you’ll sure as hell have a lot of fun keeping your bank balance ticking over.