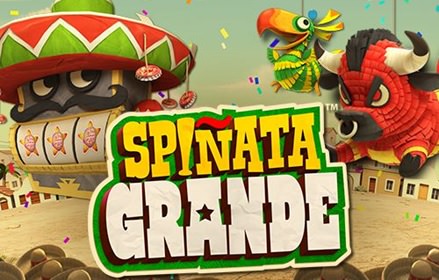 Spinata Grande is a popular, award-winning, 5 reel x 4 row slot that celebrates the Mexican party custom of piñata (and turns it into a lovely pun). The theme is a little leftfield compared some of its pop-culture referencing peers but that hasn’t stopped it achieving huge success since its release in 2014. But is the game’s reputation justified? Will it encourage an ‘arriva’ and an ‘undelay’? Does anyone know what those shamefully stereotypical Mexican words mean without looking them up? Let’s find out.

WHAT IS SPIÑATA GRANDE ABOUT?

Few nationalities know how to party quite like the Mexicans. Any nationality that can celebrate their deceased loved ones with such vim, vigour and a great massive festival like Day of the Dead deserves to be revered for their celebratory skills. But their unique attitude towards partying embraces some less grandiose traditions, such as putting on a blindfold and trying to whack a snazzily shaped paper mâché container full of sweets with a stick to release the goodies inside. It’s this little game that inspires the premise of the slot, but there’s lots more to it.

Spiñata Grande is ultimately a celebration of all things Mexican so expect moustached men in sombreros playing brass instruments to herald winning lines. The game turns the fun level up to full throttle and it’s easy to get carried along by its immensely cheery nature. It’s vibrant, it’s intriguing and it boasts some tidy gameplay touches that will engage you over repeated visits. The theme may not be the most obvious, but NetEnt have certainly made it work.

When a slot looks and sounds as good as Spiñata Grande, you naturally hope that the actual game itself doesn’t let you down. Luckily, this slot avoids any pitfalls. The player experience showcases the very best of NetEnt’s design team, who always seem to come up with a fresh take on popular bonus features. Let’s run through each one by one.

Colossal Symbols appear at random and loom large over the reels, creating blocks of 2×2 or 3×3 matching symbols. They behave like wilds so mimic neighbours to create some potentially humungous winning lines, especially if you are lucky enough to hit a 3×3 combo. We’ve known people who have hit a few colossal symbols on the bounce and given that’s it’s possible to win your stake x600 from a single spin, the possibilities are massive.

A smiling slot machine can appear across a 9 symbol cluster creating a game within a game. The mini-slot spins independently as you look to match bronze, silver and gold symbols, which convert into cash. During the free spins round, you can also win extra spins to extend your stay and give you an even better chance of using those colossal spins to your advantage.

The mini-slot feature can also propel you into Spiñata Grande’s free spins round if you land three scatter symbols. The colossal wilds are more likely to make an appearance during free spins and can create some really lucrative opportunities across Spiñata Grande’s 40 pay lines.  If you get on a run, you can quickly accumulate several medium sized wins that will leave your wallet bulging.

HOW CAN YOU PLAY SPIÑATA  GRANDE?

You can try Spiñata  Grande for on this very page and you won’t short of casino choice when you want to give it a whirl for real money. It’s available for iPad, Android tablets and leading smartphone so you can keep a little Mexican cheer in your pocket, handbag or manbag wherever you go. It’s a great game to brighten up a dull day at work (on your lunch break of course) and is often found amongst popular games lists at leading casinos.

WHAT ARE YOUR CHANCES OF WINNING ON SPIÑATA  GRANDE?

The casino jackpots on Spiñata  Grande are a relatively modest 600 times your stake amount. That doesn’t mean you can’t win big though. Granted, most of you wins are likely to be small baggers but the colossal symbols appear with enough regularity to keep proceedings very interesting. Indeed, it’s the prospect of the colossal symbols that will keep you on the edge of your seat, especially if they pop up during the casino free spins round. The game’s so much fun to play that time will pass quickly as you try and rack up a decent bank balance. Variance is towards the low side of medium and its RTP rate clocks in at just under 97%.

OUR VERDICT ON SPIÑATA  GRANDE

NetEnt are one of the best providers around and this is one of their leading slots. They’ve hit upon a leftfield concept that’s wonderfully fun and created a flamboyant design that does it justice. Spiñata  Grande is an engaging game that can quickly engross and is capable of instantly lifting your mood. Much of that is down to the game’s fun theme but it’s the possibility of those colossal symbols dominating the reels at any point that will truly steal your interest.