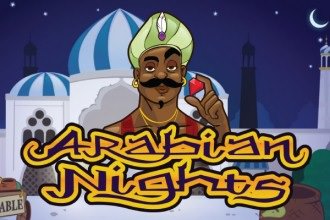 We keep a close eye on all the NetEnt jackpot slots. The Swedish gaming giant operates more network progressive jackpot slots than any other provider, and it’s been in this game for a long time. Arabian Nights is living proof of that longevity. The slot was released way back in 2006 when the concept of the progressive jackpot was still in its infancy. It helped shaped the landscape that allowed world famous slots like Mega Moolah and the aforementioned Mega Fortune flourish. But how has it fared in the face of such fierce competition over the years? Does it still stand up to scrutiny?

WHAT IS THE ARABIAN NIGHTS JACKPOT SLOT ABOUT?

To answer that question, you need to analyse all aspects of the online slot. We’ll start by saying this: ten years is a long time in gaming terms. The industry has moved on hugely in the intervening period and Arabian Nights can and should be categorised as a veteran. You simply can’t expect the super slick, 3-D animations that are indelible features of more recently released video slots. Yet, Arabian Nights, surprisingly, holds its own. If you didn’t already know how old it was, you wouldn’t guess from playing. Sure, it lacks some of the slick pizzazz of its predecessors, but it doesn’t look horribly dated or anything. Quite the contrary, in fact. Its colours are vivid, and its cartoon symbols well rendered. There isn’t much wrong with the visuals at all.

The game draws its theme from ancient Arabia. Think about the classic story of Aladdin and you won’t be too far off the mark. There’s no genie, but there’s a magic lantern scatter symbol, along with fez hats, cutlasses, and tile mosaics. The wild symbols are styled upon the game’s figurehead, an Ali Baba style character with a powerful moustache and impressive turban. It’s a classic 3 x 5 reel video slot, and there are no bonus games or animated graphics. But you wouldn’t expect there to be would you? This might not be the most hi-tech or graphically complex game in the world, but compared to other slots launched around the same period, it looks great. And the theme is nicely put together too.

Ok, so most of us play progressive jackpots with the intention of winning big. We’re chasing the big prize, hunting for a pot of gold, dreaming of diving into a massive room full of gold coins like Scrooge McDuck (apologies for the obscure cartoon reference that only 90s will recognise). But, let’s also face facts. The chances of winning a big jackpot payout are slim. That doesn’t mean we shouldn’t try – you’ve got to be in it to win it – but if all a game could offer is that dream, then it won’t hold your attention for too long.

All the best progressive jackpots need a strong main game to keep players interested. NetEnt tends to deliver on all fronts, but Arabian Nights is an old-timer of course. This has an impact on the volume of different bonus features included in the game. But its most prominent feature – a free spins round – is a great one. You get 15 free spins each time you trigger it, and there’s an extra surprise in store too.

FREE SPINS ROUND WITH X3 MULTIPLIER

The Arabian Nights free spins round is triggered by three or more magic lantern scatter symbols when they appear anywhere across the reels following a single spin. The scatters themselves are surprisingly lucrative. If you land 5, you automatically win 500 times your stake amount although the prize levels tumble quickly from there (3 lamps wins just 3 times your stake). But the real value comes from the free spins round. You’re given a generous 15 free spins every time you hit 3 scatters or more, and all wins are tripled. This gives you a fantastic opportunity to build your bank balance quickly and decisively. Outside the main jackpot, it’s clearly your best to win significant cash while playing Arabian Nights.

We’re struggling to think of too many NetEnt games without wild symbols. Slots like Arabian Nights are living proof of NetEnt’s commitment to the bonus feature that they pioneered more than any other online slot provider. The Ali Baba style characters represent the wild, and any wins he helps create and immediately doubled. This allows you to keep your balance ticking over within the main game because the wilds come along often enough to be of real worth. Arabian Nights only has 10 paylines but it often feels like a lot more. Much of that is down to the wilds and multipliers.

HOW DOES THE ARABIAN NIGHTS JACKPOT BONUS GAME WORK?

If you’ve played (or read our reviews of) the likes of Mega Fortune and Mega Moolah, you’ll know that both have exciting – if never wracking – jackpot bonus games. The latter, for example, is a tiered game that requires lucky players to proceed through a fairground style wheel of fortune game in pursuit of the main prize, and every step of the process sees increased returns against diminishing odds. Arabian Nights, however, is a bit different.

Yes, winners of the jackpot on NetEnt’s oldest progressive jackpot slot don’t enter into a bonus round at all. The reel layout never changes, and neither do the symbols. You never leave the main grid. So, how do you win? Well, it’s very simple to understand, if rather more complicated to achieve. You simply need a complete payline full of wild symbols. This is progressive jackpot slot play laid bare because, in theory, you are only ever one spin away from the main prize. You don’t have to jump through hoops to achieve it, it’s as simple as simple gets. There is a slight catch, though.

You see, NetEnt pioneered a new approach when they released Mega Fortune – by making the main jackpot available to all players, no matter what his or her stake amount. Put simply, you have an equal chance of winning the Mega Fortune jackpot, no matter whether you bet 25p or £25 per spin. Arabian Nights is not quite the same. You have to bet the maximum amount to have a shot at the biggest prize of all. That said, with 10 paylines and maximum coin value of just 50p, the most you can stake on an individual spin is £5. That’s a fair amount, but hardly the preserve of high rollers and the rich only. Plus, if you do happen to land five wilds on a payline while playing at a lower stake amount, you’ll still win 10,000 coins. Hardly a bad consolation prize!

WHAT ARE YOUR CHANCES OF WINNING ON ARABIAN NIGHTS?

So, you’ll need to bet £5 per stake for a shot at the biggest prize of all. That probably explains why the popularity of Arabian Nights has been usurped by the likes of Mega Fortune and Mega Moolah, which give you a chance of winning the jackpot no matter what your stake level. However, fewer people playing ensures there’s more of a chance of winning for those that do, even if it stops the prize pot from rising as quickly as you might like. The win history of Arabian Night is actually one of the most interesting of any jackpot slot.

At the time of writing (May 2017), the main jackpot hasn’t fallen for around 10 months. The last time it done tumble, however, it fell twice in the same day. Those two wins came hot on the heels of the previous one too, which occurred less than three weeks before. In other words, the Arabian Nights jackpot went three times in three weeks and then hasn’t paid out since. Now, that doesn’t meant that nobody has hit five wilds on a payline of course. Wins are lower stake levels aren’t recorded. But it does mean that the jackpot hasn’t fallen for some 330 days and counting – some way beyond its average payout of once every 112 days. Arabian Nights perfectly encapsulates the unpredictability of online slots and the Random Number Generators that control them. But surely the main Arabian Nights jackpot has to go soon?

OUR VERDICT ON ARABIAN NIGHTS

Arabian Nights is something of a nostalgia trip for seasoned gamers. As one of the earliest progressive jackpot slots, it helped lay the foundations that made the genre so famous. In doing so, it paved the way for other games to appear and build upon some of the concepts that Arabian Nights established. That said, this still remains a great game in its own right. The wilds, free spins, and multipliers keep the main game interesting. And although you can only win the jackpot when you bet the maximum amount, that maximum is a fairly modest £5. Besides which, you still win 10,000 coins if you’re lucky enough to land the main prize while staking at a lower amount. Yes, Arabian Nights has been surpassed by Mega Moolah and Mega Fortune in the popularity stakes, ensuring the prize pots for those two games rise more quickly. It remains a great game though, and it stood the test of time over the last 11 years.

Play Now
Play Now
Welcome Offer Is For New Customers Only. The Minimum First Deposit Required Is £5, For All Subsequent Deposits The Minimum Deposit Is £10. The 100 Chances Are Credited As A £25 Bonus And Players Can Wager 100 Times At £0.25 On The Mega Moolah Slot Machines. A Two Hundred Times Wagering Requirement Applies On All Bonuses And Certain Games Contribute A Different Percentage To The Wagering Requirement. See Full Terms And Conditions Here. See more
Zodiac Casino
On Registration