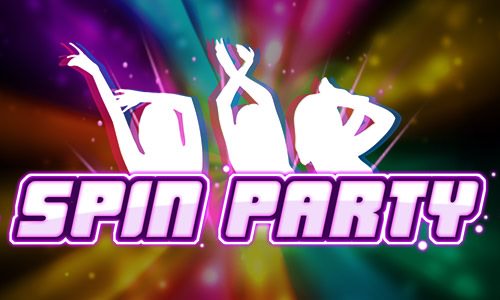 We’re not known for our collective dance moves here at 777 Casino, although I like to think my patented elbow thrusts have stolen a few hearts across the years (NOTE: they haven’t). But even we can’t fail to tap a toe, nod a head and swing some shoulders while playing Play n’ Go’s Spin Party. This is a slot that invites you to join the throbbing dancefloor of a tub-thumbing rave – complete with some pound tunes (or ‘choonz’ as we like to spell it). It’s not subtle, but it’s certainly different. And it’s a potentially a significant money maker too.

WHAT IS SPIN PARTY ABOUT?

It might boast a palpably modern theme, but Spin Party’s symbols are remarkably traditional. There are lemons, cherries, bells and our favourite the 7, just like you’d find on an old fruit machine. It’s the other elements of the game that give this online slot its contemporary look and feel. It won’t be for everyone, but loads of people will and do love it.

So, what are we talking about here? Well, there’s a pounding dance music soundtrack for starters. We’re no experts, but we think it’s largely deep house and techno, techno, techno. The tracks become even more fervent when you’re nearing a win. It’s amazing how much effect a game’s music can affect your experience. It’s difficult not to feel pumped when playing the game. It makes those wins a little sweeter. And boy, can some big wins come along. More on that later.

The game’s visuals also celebrate party culture. Nobody would ever claim it is the most sophisticated slot and hence, you’ll find that dancing girls pop up with some sassy moves when you hit the game’s signature feature, the expanded wilds. This online slot wants you to have fun. Sure it’s cheesy – almost as cheesy as the slang is this review (apologies) – but it’s not meant to be high brow. We must confess here – we got caught up in the party spirit. Although that was probably more down to some excellent bonus opportunities and payouts that any particular longing to ‘groove’.

Yes, Spin Party’s ‘party spirit’ is extended to the gameplay too. Compared to other online slots, it doesn’t boast a slew of in-game features. Boy, does it make something of those that it does have, though? It’s all about the expanding wilds, which trigger respins at worst (it’s not a bad ‘worst’) and win spins at best. But what the heck are ‘win spins’ eh? Well, let’s find out a little more.

When a dancing wild girl shimmies her way onto reel 2, 3 or 4, you’re in luck. Every wild is an expanding wild on Spin Party. These girls also trigger a respin with the expanded wild fixed in place. If the symbols fall kindly, then you could end up with a nice little payout. Best of all, the expanded wilds pop up nice and frequently. Sounds good? There’s better to come.

That’s because 2 or more expanded wilds can appear across the middle three reels from a single spin. When that happens, you’re in for a real treat. And no, the silhouetted girls don’t start stripping. This is much better than that because 2 expanded wilds trigger 5 ‘win spins’. There are much like respins, only better – because they guarantee you some cash. Yep, all 5 spins will drop some coins. Some of these wins have been huge too.

WHAT ARE YOUR CHANCES OF WINNING ON SPIN PARTY?

This is a tricky one to judge. There doesn’t seem to be a consensus regarding the volatility of Spin Party. Having played it thoroughly, however, we would err on the side of ‘high volatility’. Why? Well, because the slot only has 10 paylines, the wins don’t come along too often. In fact, you are almost entirely reliant on the Expanded Wilds if you want a big win. You’ll land one wild and attached respin quite frequently. That’s likely to keep your bank balance topped up but don’t expect to win every time this feature pops up.

Two expanded wilds are much rarer, but here’s the rub. Those Win Spins guarantee you cash and transform a Spin Party session into a massive earner. Wins of x100 or x200 are realistic in this mode (you can win up to x5000 times your bet at the high end), which will appear to most gamers. You can’t help feeling that it could do with a bonus game but there’s no doubt you can fill your boots on Spin Party regardless. It has an RTP of 96.5% and you can stake between £0.10 and £150 on a single spin.

OUR VERDICT ON SPIN PARTY

We doubt Play n’ Go were pitching for universal approval when they released Spin Party. This undeniably fun slot does have some cheesy elements like the dancing girls, and it’s hardly the most visually stunning. Techno fans may still love the theme but your most compelling reasons to play are those expanding wilds and win spins. Don’t let the simplistic design and dearth of bonus features fool you – it’s possible to win big on Spin Party if you exercise a bit of patience. We’ve dropped several hundred times our stake before now, and that’s worth a ‘little fish, big fish, cardboard box’ of our own.