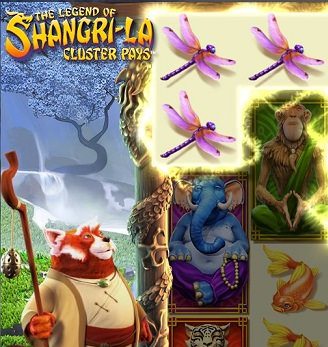 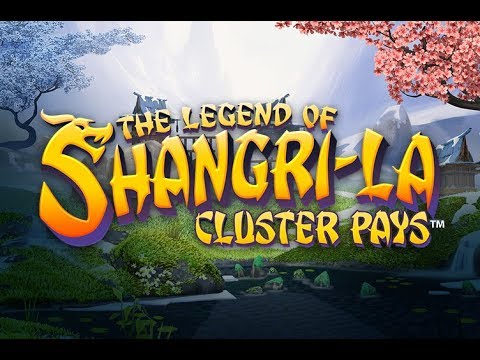 The best casinos to play The Legend of Shangri-La

So, The Legend of Shangri-La: Cluster Pays. It may be a bit of a mouthful to say (or fit into the title of an article on a casino news site) but it’s really easy to play.  As we’ve come to expect from any NetEnt release, the game is beautifully rendered and speckled with interesting gameplay touches. Indeed, the special features distinguish from its sister slot Aloha! Cluster Pays, which has the same principle at its core. You still form winning lines via clusters of identical symbols rather than complicated patterns of payline. But the devil is in the detail, and The Legend of Shangri-La has enough flourishes to ensure it’s a standout slot in its own right.

WHAT IS THE LEGEND OF SHANGRI-LA ABOUT

You mean to tell me you don’t know about the Legend of Shangri-La? The mystical, utopian land in the Kunlun Mountains of China? Pah, have you been living under a rock? Ok, ok, so I had to Google it too. Something tells me that the creative team at NetEnt are either a) extremely knowledgeable (nerds), or b) prolific Googlers themselves. And I’m not sure ‘Googlers’ is even a word. They take inspiration from musicians, fairytale writers, cartoonists and pop culture. The team also have a penchant for mythical history. So, we come to the Legend of Shangri-La: Cluster Pays, a game based in the mysterious valley where the people are said to be immortal.

Not that they play on the latter point. The game is hosted by a giant red panda (or is it a fox – a red panda makes more sense right?) who stands at the side of the reels celebrating each win. It’s NetEnt, so the visuals and audio are both on point, featuring vivid colours and traditional Chinese Music. Peaceful waterfalls and lush greenery form the backdrop for the game, while the symbols feature magical monkeys, tigers and elephants, as well as exotic flowers and fish. It’s not quite as overtly jovial as Aloha!, but The Legend of Shangri-La: Cluster Pays is a tranquil yet fun online slot that rewards repeated visits.

The clusters are the most noticeable gameplay element of The Legend of Shangri-La: Cluster Pays, but it has a smattering of excellent special features too. It’s impossible not to compare it to Aloha! in this respect, and it shares the same ‘stacked symbol’ feature as its Cluster Pays bedfellow. This means that larger symbols ‘count as 2’, which is helpful when you’re trying to form clusters of 9 symbols or more. We’re not classing that as a special feature as such, though. Let’s run through those now.

I wasn’t going to class this as a feature either, but it’s an unusual way of winning and warrants some explanation. A symbol forms part of a cluster when sits adjacent to other matching symbols, without any other symbols in between. It doesn’t matter whether these symbols connect vertically or horizontally. If you land a cluster of 9 symbols or more, then you win. The bigger the cluster, the bigger the payout.

Essentially wilds in all but name, substitution symbols will transform into an adjacent symbol if it helps you form a win. Alternatively, it will mimic adjacent symbols in a cluster to form a bigger win. The substitution symbols is a green glass orb with a question mark in it (they look like something the Riddler would use in Batman) and don’t appear as often as wilds do in more standard slot games. When they do, they will help you keep your pay pot ticking over, but not much more.

Let’s say you take a spin and end up with two small clusters of the same symbol on the grid. This scenario can trigger the random substitutions feature, whereby the red panda spins some magic from his finger and adds a substitution symbol to the reels. He’s a helpful bear, and sticks it next to adjacent cluster so you can essentially join ’em up and bag yourself a juicy little win.

The same scenario can also trigger a nifty sticky re-spins. If you end up with two non-winning clusters of matching symbols, they will stick to the reels while you spin again in the hope of landing a helpful conjoining symbols to activate a win. You’ll keep spinning until a new ‘winning’ symbol doesn’t appear to supplement your existing cluster.

The free spins symbol features quite the mystical scene, with a dragon bearing down on a striking hilltop. More important, you’ll activate the free spins if you land three or more from a single spin. A trio of them earns you 3 free spins, but the unlikely spectre of 6 wins you 8 free spins. 4 and 5 are worth 6 and 7 free spins respectively. Despite the fairly low number of free spins available, you stand a great chance of winning some dosh because substitution symbols are randomly dropped on to the reels to help you form clusters.

WHAT ARE YOUR CHANCES OF WINNING ON THE LEGEND OF SHANGRI LA?

The Legend of Shangri-La: Cluster Pays plays like a low to mid volatility slot. Clusters come along regularly, but often at low value. However, the red panda helps convert an average session into something much more exciting. The random substitutions can form some massive clusters, which are worth their weight in gold. We were slightly disappointed when we first saw the number of free spins on offer in the free spins round too. Now we’ve played it and seen the difference that the substitution symbols can make, we’ve changed our minds.

Overall, NetEnt seems to have struck a good balance. The Cluster Pays feature is really accessible for beginners, who will also appreciate the regular small wins. The special features, meanwhile, will help retain the interest of players who seek a bigger windfall. Don’t get me wrong, this is no Dead or Alive or Book of Dead. You’re unlikely to win a ridiculous amount of money and high rollers will look elsewhere. But then you’re unlikely to lose much either. For my money, it’s the perfect lunch break slot. Something you can enjoy while only half able to concentrate on the action, that also offers you the opportunity to score a decent sized win. Oh, and the RTP Rate? 96.59%.

OUR VERDICT ON THE THE LEGEND OF SHANGRI-LA: CLUSTER PAYS

I almost get bored of saying it, but NetEnt rarely disappoint. They’ve reached a level of experience and expertise that brings a undeniable stamp of quality with it. They’ve also developed a penchant for series, of which the Cluster Pays feature seems to be the next. That comes with inherent danger of course. It would be easy for these slots to share so much in common that only the theme denies them. Perhaps the best thing about The Legend of Shangri-La: Cluster Pays is that it addresses some of the flaws of its predecessors without losing its sense of fun and accessibility. By introducing the random substituting features and sticky re-spins, it introduces more chances to win and more reasons to hold your attention. We’ve all enjoyed playing it at 777 Casino. I’m sure you will too.